The latest R&D developments in solar cooling presented during a workshop in Madrid, Spain, on 11 April sparked great interest among the attendees from the international air conditioning industry. Held at the headquarters of the Spanish Institute for Energy Diversification and Saving, IDEA, the event brought together representatives from companies, such as Baxi Roca, Carrier, Fujitsu, Kaysun and Panasonic, as well as researchers from Task 53, New Generation Solar Cooling and Heating Systems, of the IEA Solar Heating and Cooling Programme. The presentations showcased innovative solutions driven by solar heat or solar power. The experts agreed that solar cooling will be a market for both solar thermal and solar PV solutions over the coming years and will capture new territory outside Europe, such as in the Middle East or China. A current study on the Arab region concluded: PV cooling technologies are more economical than grid-driven electric chillers at cooling loads of 100 kWc, whereas solar thermal cooling should be used for 1 MWc cooling.
Photo: IDEA
The Green Chiller Association for Sorption Cooling and French company Tecsol and German company Solem Consulting estimate the size of the global solar thermal cooling market to have ranged between 100 and 200 new systems annually between 2009 and 2014. Whereas some years ago, this market had been dominated by installations in Europe, the majority of solar cooling systems installed in 2013 and 2014 was set up outside of the region. Prospering markets were China and the Arab region, especially Golf Cooperation Council countries, according to Daniel Mugnier, Operating Agent of Task 53.
A recently published study, entitled Assessment on the Commercial Viability of Solar Cooling Technologies and Applications in the Arab Region, recommends an R&D and demonstration programme funded with approximately USD 4.5 million to instigate the following actions (see the attached PDF):
The Solar Cooling Roadmap for the Arab Region was devised by Solem Consulting in cooperation with French Tecsol and was commissioned by the Division of Technology, Industry and Economics of the United Nations Environment Programme (UNEP). It is based on the guidelines for drafting solar cooling roadmaps, which were established before the end of solar cooling Task 48 of the IEA SHC (see the attached document). The roadmap’s authors presented their results before the Renewable Energy & Energy Efficiency Expert Committee of the League of Arab States (LAS) in Cairo at the end of March.
Solar cooling as peak load buffer
“Cooling demand has increased by a lot across the Arab states, causing power cuts from which the majority of the countries suffer,” Ashraf Kraidy, Senior Advisor to the LAS Energy Department, explained the motivation to conduct the above-mentioned study on commercial viability. “We wanted to find out which technology is suitable for our region.”
Residential power prices have always been low in the Arab region, whereas electricity tariffs in the tertiary and industrial sector are much higher. So the roadmap case studies focused on larger applications with cooling loads of 100 kW and 1 MW. “The high upfront costs of solar cooling technologies require highly efficient solutions,” the authors of the study argue. This meant installing absorption double effect chillers, which lead to thermal COPs above 1, as well as scroll chillers, which have the best adaptability to match varying solar electricity supply.
The study compares the Levelised Cost of Cooling Energy (LCCE) for three different technologies over 20 years based on the assumption that the cooling system is undersized and that the majority of the solar cooling production can be used inside the building (see the chart below): 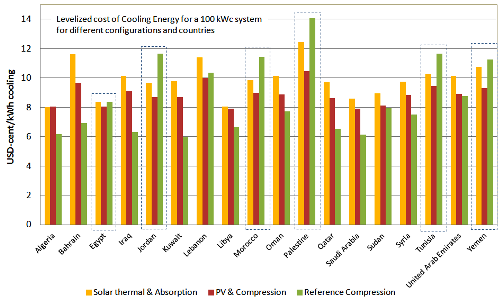 Egypt, Jordan, Morocco, Palestine, Tunisia and Yemen are the countries in which the compression chiller unit driven by PV is the most cost-effective solution for 100 kWc applications. In all of the countries, solar thermal cooling is more expensive than PV cooling.
Source: Solar Cooling Roadmap for Arab Region
PV-driven 100 kWc cooling systems are competitive in six countries, without the need for incentives: Egypt, Jordan, Morocco, Palestine, Tunisia and Yemen. To match subsidised energy prices in the other countries, the authors propose a 50 % grant on capital costs in order to increase the attractiveness of the systems.
In the 1 MWc segment, the study preselects six countries where electricity and water costs lead to greater feasibility and where a significant number of suitably large buildings exist: Bahrain, Kuwait, Oman, Qatar, Saudi Arabia and the United Arab Emirates. The chart below shows that in the United Arab Emirates, solar cooling solutions have already been more economical than the reference case over 20 years, because the electricity costs for commercial use have been 10.8 USD-Cent/kWh, driving up the operational costs of the latter. With a 50 % upfront subsidy on the solar cooling investment, PV and thermal can also be cheaper in two other countries: Oman and Saudi Arabia. 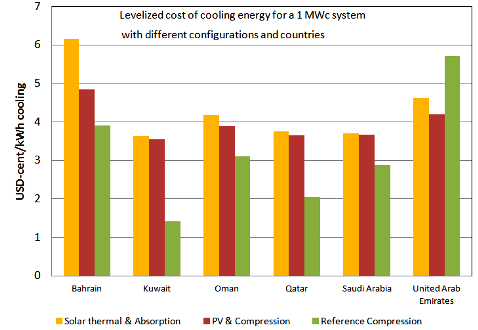 Levelised Costs of Cooling Energy (LCCE) for different configurations in the six preselected countries without subsidies
Source: Solar Cooling Roadmap for Arab Region
The decision between PV cooling and solar thermal cooling systems in the 1 MWc segment should include deliberations about the space required for the system. “As an example, in Saudi Arabia, the PV field would be approx. 4,700 m², whereas the solar thermal field would only be 2,460 m²,” the study says. The authors urge clear recommendations for solar thermal cooling technologies in the 1 MWc segment, whereas the 100 kWc segment showed PV cooling technology was more economical.
Download the programme and the presentations of the solar cooling workshop held in Madrid in April.
Websites of institutions and projects mentioned in the article:
TASK 53: http://task53.iea-shc.org/
Tecsol: www.tecsol.fr
Solem Consulting: http://solem-consulting.com/en/welcome-solem-consulting/
League of Arab States (LAS): http://www.lasportal.org/Pages/Welcome.aspx
United Nations Environment Programme (UNEP): www.unep.org/