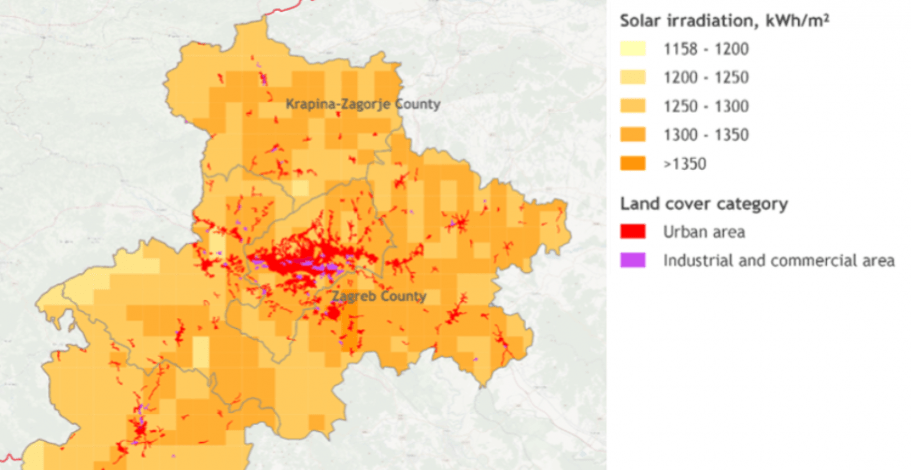 As district heat will be one of the key pillars of a decarbonised heat sector, authorities, utilities and energy service providers are eager to explore the opportunities that local sources of clean energy could provide for the DH market. To this end, a consortium led by consultancy Ambiente Italia developed guidelines on estimating the renewable district heat (RES DH) potential of municipalities and counties as part of a project called ENTRAIN. Drawing on these guidelines, project partners have already carried out studies in all five ENTRAIN regions. The results for Croatia can be seen on the map.
Source: ENTRAIN
Deep knowledge of energy supply and demand patterns in the target areas is crucial to designing an RES DH network. Consequently, the guidelines describe a three-step approach that starts with an assessment of demand and an analysis of supply and ends with an evaluation of regional potential:
However, while this quantitative analysis may show positive results, successful and smooth implementation hinges on the support and involvement of the local community. A close collaboration with end users as well as other relevant stakeholders in the target area should be a key element of all three phases.
Each topic included in the guidelines comes with its own set of key questions that DH network builders should be able to answer if they want a complete and accurate analysis. The last section of each chapter shows a list of tools and references, providing readers with examples of research methods, best practices and potentials studies conducted as part of previous projects and initiatives.
Not just biomass: An example from Croatia
ENTRAIN focuses on five regions in Croatia, Germany, Italy, Poland and Slovenia. In Croatia’s case, the study focused on the Karlovac, Krapina-Zagorje and Zagreb counties, finding that biomass is the primary source of energy across the region. The technical potential of wood is up to 3.55 PJ per year, whereas another 0.49 PJ could be provided by short-rotation crops. The total, slightly over 4 PJ a year, could supply about a third of the heat required by the counties.
But there are more clean sources for district heat in the area besides biomass. To assess the solar thermal potential in the Croatian counties, the project partners used the Corine Land Cover tool. This tool provides users with an entire inventory of plots in 44 categories with a minimum size of 25 hectares for analyses of areas and a minimum width of 100 metres for linear assessments. The results can be seen on the map at the beginning of this article. All city-wide industrial and/or commercial sites that allow for rooftop systems are shown in purple, while urban areas where new DH networks could be put up are coloured in red. As for potential solar output, the map also shows the distribution of annual solar irradiation, which is similar in all three counties and ranges from 1,200 kWh/m2 to 1,350 kWh/m2.
Solar landfills in Germany
Another ENTRAIN region is Neckar-Alb in southern Germany, where the renewable heat potential differs in urban and rural areas, with less space available for solar thermal systems in conurbations. And yet, ‘energy imports’ from the countryside could make up for that shortage.
Overall, the Neckar-Alb study concluded that the use of solar thermal energy to meet 15 % of DH demand would require 800,000 m² (80 ha) of land or 400,000 m² of collector area (280 MWth). Higher proportions are possible and could be achieved by putting up larger systems and seasonal heat storage. The study also highlights a second option, that is, the option of building large solar thermal systems on former landfill sites in several of the region’s municipalities. 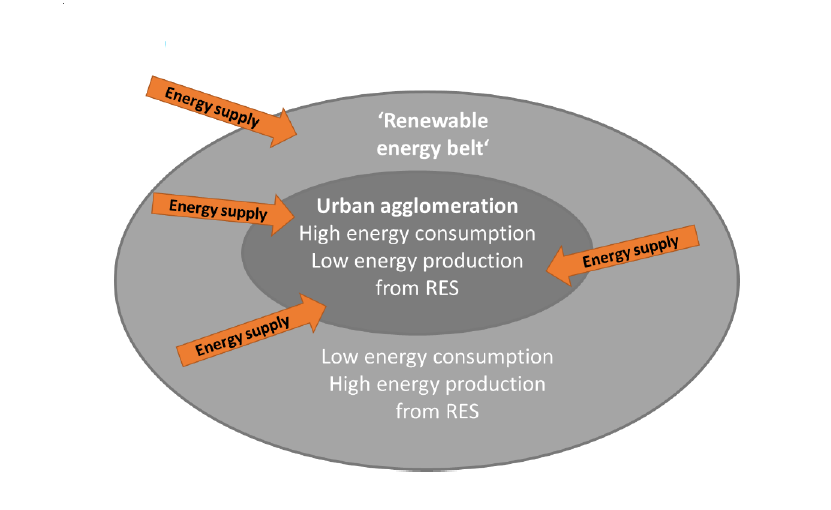 Link between conurbations and rural areas rich in clean energy sources
Source: ENTRAIN
Three years for reaching objectives
ENTRAIN is a 3-year project, which was launched in April 2019 and will end in March 2022. Supported under the Interreg Central Europe programme, it specifically aims to improve local strategies for low-carbon energy planning and policies that support climate change mitigation. Its 11 project partners are from 6 different EU countries, i.e., the countries of the five ENTRAIN regions, plus Austria as a provider of RES DH know-how. The consortium is made up of energy agencies, consultancies and research institutes, a biomass association and a coalition of municipalities. The total available budget is around EUR 2.5 million.
This article was written by Riccardo Battisti, a solar thermal consultant and market researcher working at Ambiente Italia (Rome, Italy).
Organisations mentioned in this article:
ENTRAIN project: www.interreg-central.eu/Content.Node/ENTRAIN.html
Ambiente Italia: www.ambienteitalia.it
Corine Land Cover: https://land.copernicus.eu/pan-european/corine-land-cover