The recent approval of Working Rules means that the Global Solar Certification Network (GSCN) can now accept membership applications. The reuse of test and inspection reports in different certification schemes will be possible at the beginning of 2017. The GSCN was developed in Task 43 of the IEA Solar Heating and Cooling Programme to facilitate the cross-border trade of high-quality solar thermal products. The world map shows all the certification schemes which are already on their way into the GSCN – and more are said to follow soon. GSCN industry members can use a collector test report or a production inspection report from one of these schemes to apply for a certificate in another part of the world which is also part of GSCN. The procedure saves manufacturers time and money by removing the need for collector retesting or a second site inspection.
Map: GSCN
This is the successful outcome after several years of negotiations among certification scheme administrators and test labs from all around the world. “During our meeting in Beijing in October 2014, we came to a general agreement on the mutual recognition of test reports,” explained Jan Erik Nielsen, Manager of the GSCN. The meeting was the starting point of intensive debates about the Working Rules, which have now been approved and are available for download on www.gscn.solar.
The website also explains how test reports submitted by GSCN manufacturing members will be recognised:
Website www.gscn.solar provides the lists of certification and inspection bodies and testing facilities participating in the GSCN and shows which laboratories and inspection facilities are recognised by which certifying bodies. 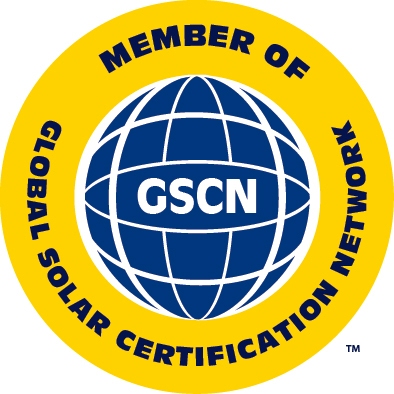 GSCN members can use the logo on websites, brochures, etc.
GSCN membership is granted to manufacturers, certification bodies, test labs and inspection facilities. “We have already received more than ten applications,” said Nielsen. Fifteen stakeholders were elected to the temporary board representing test labs, certification bodies und industries from all around the world. The chair of the board is GSCN network chair Harald Drück from the German Institute of Thermodynamics and Thermal Process Engineering, University of Stuttgart. The final makeup of the board will become clear during the next GSCN meeting in Berlin, Germany, in March 2017, when membership applications are processed.
To cover administrative costs, the annual GSCN membership fee is EUR 125. Application forms are available online. It is also possible to become a supporting member. German research institute Fraunhofer ISE will host the relevant GSCN meeting on 9 March 2017 in conjunction with the Solar Keymark Network one.
The implementation and promotion of the GSCN is coordinated by members of Task 57, Solar Standards and Certification, of the IEA Solar Heating and Cooling Programme. This task will run another two years until the end of 2018.
Relevant websites:
http://www.gscn.solar/
http://task57.iea-shc.org/
http://task43.iea-shc.org/
News
Certification
China
Germany
IEA SHC Task 43
IEA SHC Task 57
Global Solar Certification Network
GSCN
IEA SHC
University of Stuttgart
Fraunhofer ISE
Solar Keymark Network