“Growing demand for air conditioners is one of the most critical blind spots in today’s energy debate,” Fatih Birol, Executive Director of the IEA, said as he presented the findings of The Future of Cooling report in May. The chart shows that, in the baseline scenario, cooling is projected to be responsible for between 25 % and nearly 50 % of peak electricity loads in the United States, the Middle East, Indonesia, India and Brazil in 2050. Globally, demand is expected to triple by the same year. The world’s stock of AC units is said to rise to 5.6 billion by 2050, up from 1.6 billion today, which reportedly means an average of 10 ACs will be sold each second over the next 30 years.
Chart: OECD/IEA
The major drivers of demand will be economic and population growth in the hottest regions of the world, where just 8 % of 2.8 billion people live in air-conditioned buildings compared to over 90 % of the households in Japan and the USA. The market is getting larger in countries that have seen a rise in income levels, which has made ACs more affordable for many. But the authors of the report warn that new power plants in sunny countries will also need to meet peak electricity demand at night, for which they consider renewables to be essential. As they state in the executive summary, one-third of the cooling-related generation capacity added in the baseline scenario stems from solar power alone. However, they believe that this is not sufficient, since solar power supply does not always match demand: In many countries, cooling needs to be available well after sunset.
The authors therefore suggest implementing minimum energy performance standards and labelling to reduce electricity consumption. “Setting higher efficiency standards for cooling is one of the easiest steps governments can take to reduce the need for new power plants and allow them at the same time to cut emissions and reduce costs,” Birol was quoted as saying in the IEA press release that followed the report’s publication. 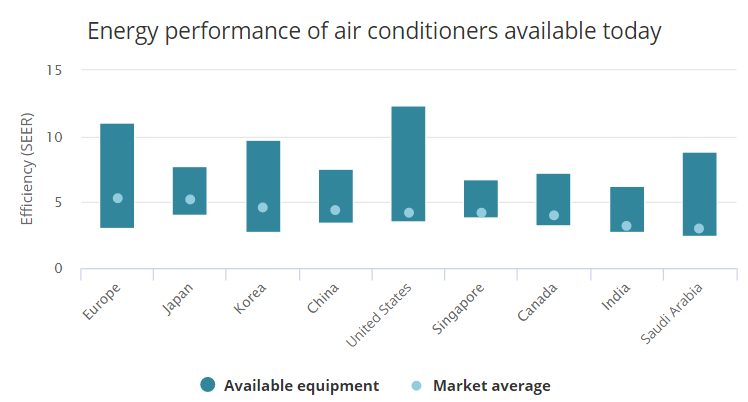 Many air conditioners available on the shelves are more than twice as efficient as the ones being sold.
Source: IEA/Highcharts.com
Unfortunately, energy-efficient air conditioning based on solar thermal or district cooling is not part of the executive summary. These systems are described on three pages in a chapter titled Other cooling solutions (pp. 52 to 54):
“Solar thermal cooling systems using sorption chillers are to date relatively niche technologies, but the market is growing as costs come down. At the end of 2015, an estimated 1,350 solar thermal cooling systems had been installed worldwide – around 80 % of them in Europe, mainly in Spain, Germany and Italy. […] Additionally, further innovation and cost reductions are needed to provide integrated cooling solutions using solar thermal technologies when the sun goes down.”
The last sentence especially shows that the IEA authors have yet to be made aware that, regarding energy storage, thermal heating and cooling technologies available on the market are much more cost-effective than batteries.
The Future of Cooling is the second IEA report to focus on blind spots in the global energy system. The first one was The Future of Trucks, released in July last year. You can download the report at https://www.iea.org/cooling
News
Solar Cooling
Policy
United States
Indonesia
Middle East
India
Brazil
demand peaks; air conditioning
IEA
International Energy Agency