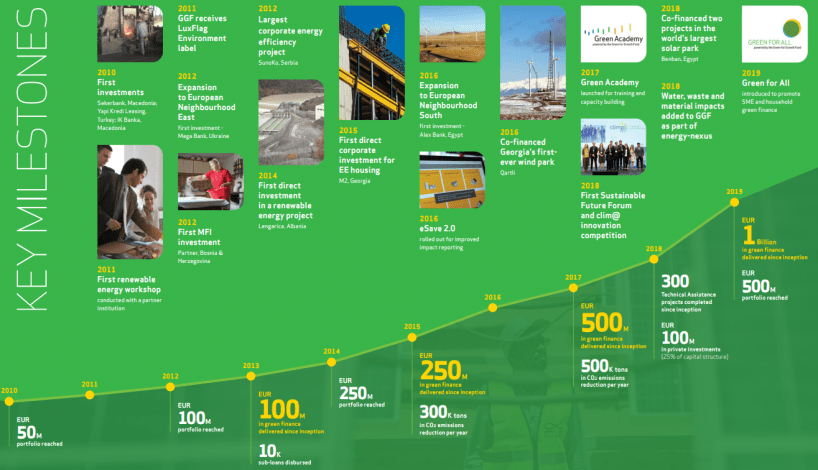 The Luxembourg-based Green for Growth Fund (GGF) has recently entered its 11th year in operation. A pioneering public-private partnership, it was launched by the European Investment Bank and the German KfW bank in December 2009 and supports energy efficiency and renewable energy projects primarily in southeast Europe. Since its founding, GGF has not only provided banks with money for on-lending to consumers as well as small and mid-sized businesses, but it has also invested directly in renewable energy projects and energy service companies (ESCOs).
Chart: www.ggf.lu
In the editorial to GGF’s Impact Report 2019, Olaf Zymelka, Chairman of the fund’s Board of Directors, struck a positive note, writing: “We have expanded into new regions in Eastern Europe, the Caucasus, the Middle East and North Africa.” Altogether, the fund had provided over 36,000 clients with a total of EUR 1 billion in green finance to reduce energy and resource consumption and increase renewable energy deployment, he added (see the attached PDF).
According to Zymelka, GGF does not limit itself to big projects, such as wind or PV farms, but considers small systems an important element of its strategy to transition to a low-carbon economy. It has taken a standardised approach to financing solar thermal projects, one used by nearly 1,400 people thus far. Across markets, the GGF chair said, there has been “a general trend towards deregulation, resulting in higher tariffs. We expect this to continue as the regulations in our target markets become more aligned with EU energy policy. In that sense, there is a lot of promise for small solar thermal systems in the regions surrounding the EU.”
The most important markets for solar thermal, Zymelka said, “are the Western Balkans and Turkey, in which we invest respectively 47 % and 48 % of our SWH budget.” The main beneficiaries of the money spent by GGF have been SMEs, at 60 % of the budget, followed by households at 39 %. Most recently, GGF added solar thermal cooling to its list of eligible technologies, Zymelka confirmed.
GGF is collaborating with banks and financial intermediaries, e.g., microfinance units, throughout its 18 partner countries. You can view its partner institutions by clicking on one of the green-coloured countries on GGF’s interactive map. In all, the fund’s financial instruments consist of a senior and a subordinated medium- to long-term loan. All GGF-supported projects must reduce on-site energy consumption or CO2 emissions by at least 20 %.
Serbia is one of GGF’s most important markets. The Stari Bunar (Old Well), a small restaurant in the centre of Serbia’s capital Belgrade, is a good example of what projects GGF helped implement in its early years. Back in 2010, restaurant owner Cana Petrović applied for a GGF loan to buy a heat pump and a solar water heater. Retrofitting the heating and cooling systems at the Stari Bunar resulted in a 40 % reduction in energy consumption, saving Petrović round about EUR 1,500 annually. The case study is described in the attached GGF guide on page 11. 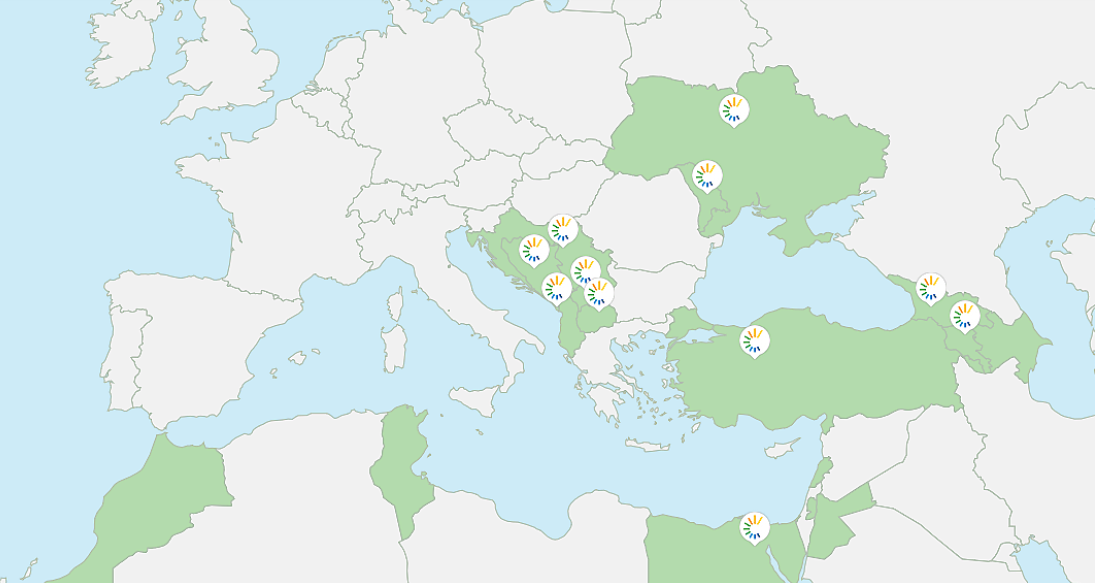