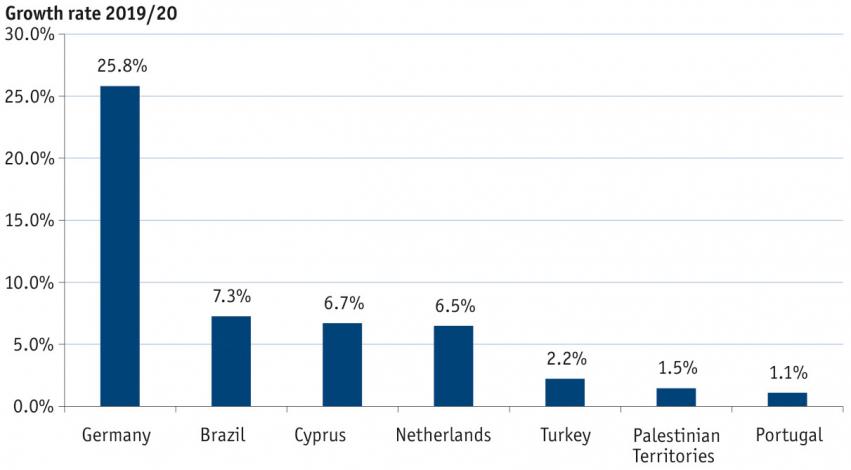 In 2020, the German market for solar heat grew by 26 % – more than any other major solar thermal market around the globe, according to the new Solar Heat Worldwide 2021 report (see chart above). Speaking at an IEA SHC Solar Academy in June, Harald Drück, a researcher at German University of Stuttgart’s Building Energetics, Thermotechnology and Energy Storage Institute – IGTE, said this success story was possible mainly due to relatively high incentives granted by BEG, Germany’s extremely attractive programme for funding energy-efficient buildings, and the country’s rapidly growing submarket for solar district heat. But he also warned that the solar obligations under discussion in some regions in Germany would de facto make PV mandatory and threaten the gains achieved in the sector. You can find a recording of the webinar here.
Source: Solar Heat Worldwide 2021
During his presentation, Drück first sketched out the long-term evolution of the German solar thermal market. The story of success began in 2008, also considered by many the peak year for oil globally, as 1,500 MWth of solar heat capacity, or about 2.1 million m2 of collector area, was installed in Germany. “We all thought things would move more quickly after that. But the exact opposite happened. Capacity fell year after year. In 2019, it was down to 360 MW, about a quarter of the volume we had in 2008,” said Drück. One explanation for this, he added, was that the government offered “extremely attractive PV feed-in tariffs at the time”. But as the German government made no significant changes to solar thermal incentives in the decade between 2009 and 2019, these incentives can be ruled out as a reason for the sharp decline. From a psychological standpoint, PV was favoured because investors could make money from the tariffs. The marketing strategy to promote solar heat, on the other hand, had to focus on how the technology generated savings. “And, as so often, earning money was more important than merely saving it,” Drück concluded. 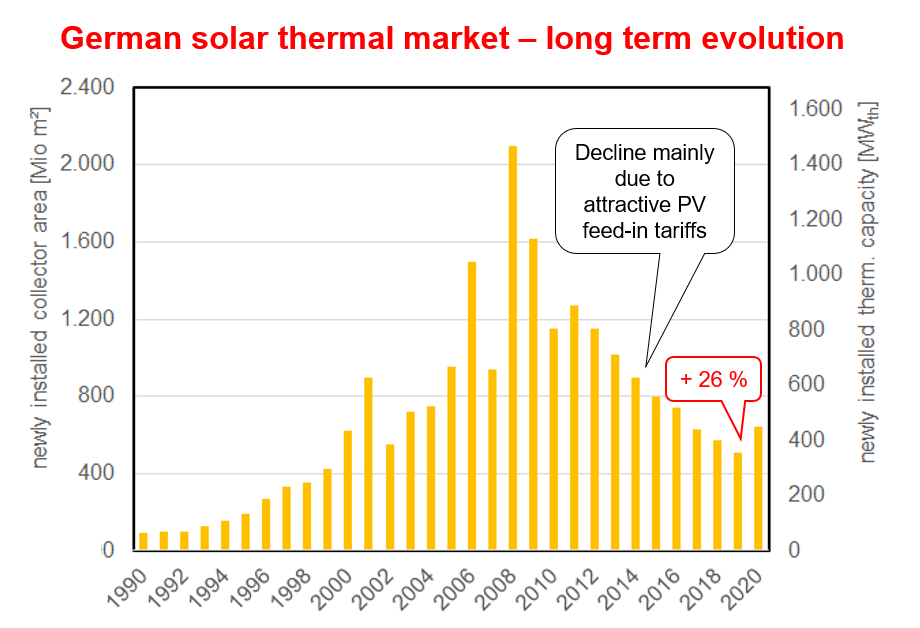 Level playing field for all renewables
However, things are changing, rapidly, said Drück. Feed-in tariffs are much less profitable than they were years ago. And with the overall focus shifting to on-site consumption, PV systems are becoming ever more like solar thermal installations in that investors can save but not earn money with them. In combination with BEG’s attractive funding opportunities, those changes helped grow the solar thermal by 26 % in 2020, resulting in around 500 MWth of newly installed capacity.
The BEG offers homeowners grants that cover up to 45 % of the cost of replacing oil boilers with solar-assisted heating. The special feature of the BEG regulations in effect since the start of 2020 is that the 45 % funding rate now applies to eligible costs. These include the cost of buying and installing a heating and a solar thermal system, new radiators and floor heating, plus chimneys and other improvements to heat distribution.
And in more good news, the German market has not stopped growing. According to statistics compiled by BDH and BSW Solar, two national associations that represent the heating and the solar industry, the solar thermal collector area sold in Germany was up by 23 % in the first quarter of 2021, compared to the same period a year earlier, and by 10 % in the second. 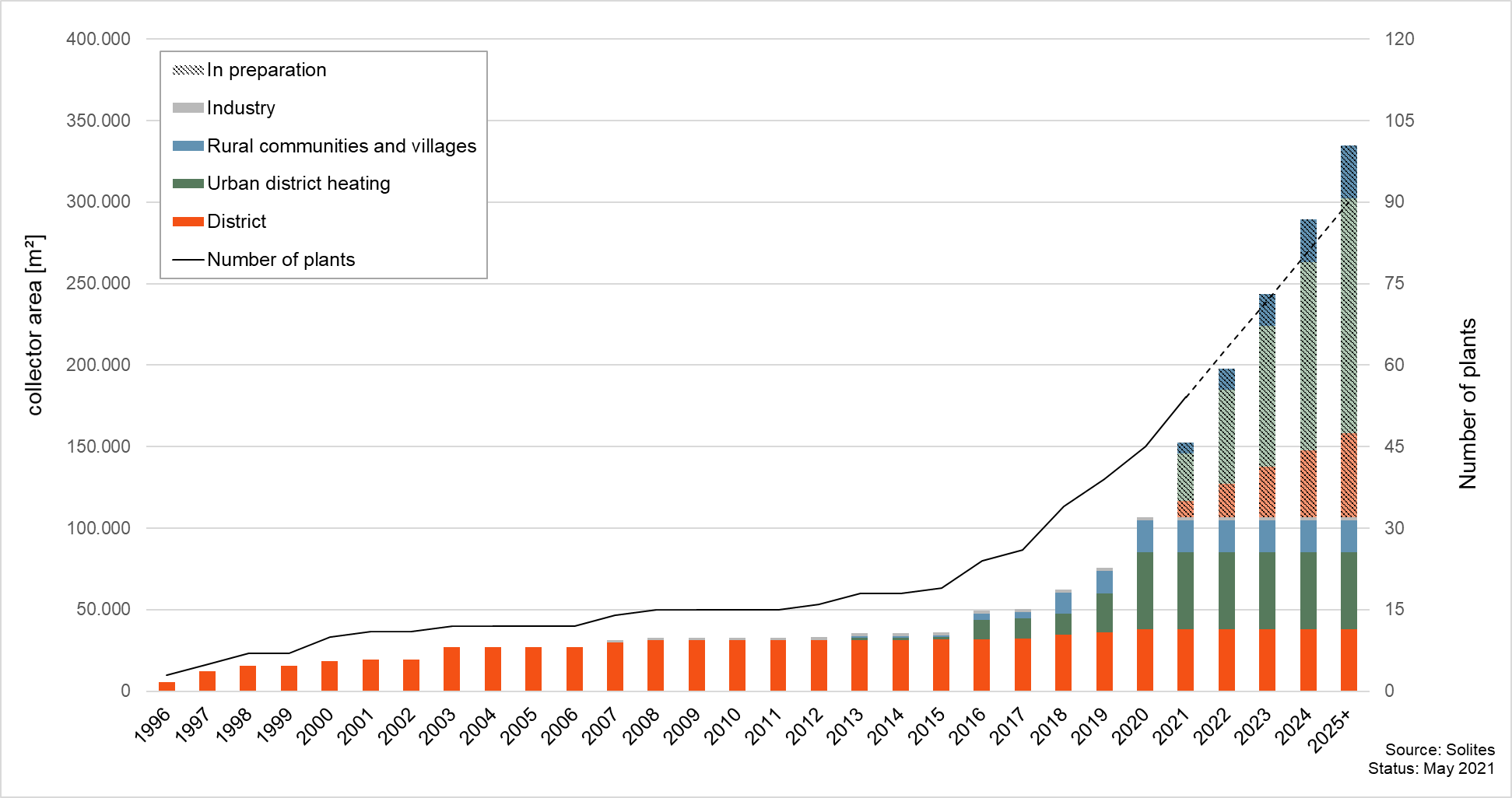 Increase in solar district heating capacity over time. By the end of 2020, there were 41 SDH plants in operation in Germany, totalling about 70 MWth of capacity, or about 100,000 m2. The small grey section of some of the bars indicates the total installed heat network capacity in the industrial and service sectors. So far, only two solar fields have been put in this category: a 1,330 m2 system built for the Festo company in 2007 and 477 m2 for a hospital commissioned in 2012.
Source: Solites
Operational SDH capacity expected to triple
Drück also thinks large solar thermal systems will bolster Germany’s success story in the years to come. He presented estimates by German institute Solites, which expects annual additions of about 35 MWth in the near future (see the chart above).
Thanks to the start-up of six solar district heating installations totalling 22 MWth, Germany surpassed Denmark in capacity additions last year, after seeing five SDH systems with a total capacity of 7.1 MWth added in 2019. The 2020 additions also include Germany‘s then-largest plant, a 10.4 MWth system put up in Ludwigsburg. Among the new plants still to be commissioned this year is a 13.1 MWth system in Greifswald. Once completed, it will be the country’s largest SDH installation, ahead of the Ludwigsburg plant. In total, Solites estimates SDH capacity in Germany to triple within the next few years and grow from 70 MWth at the end of 2020 to about 190 MWth by the end of 2025.
Technological neutrality
“If the long-term evolution of the German solar thermal market has taught us anything, it’s that we need an environment in which different renewable technologies can compete fairly for a share of the market,” said Drück. He called on policymakers to use technologically neutral language when drafting new regulations, warning that the solar obligations currently being discussed in several German states and cities essentially amount to nothing more than PV mandates, since they require the installation of rooftop photovoltaic panels on newbuilds or buildings undergoing major renovation.
For example, the southern German state of Baden-Württemberg has recently approved regulations that will stipulate the use of PV generators on the roofs of all new non-residential structures (factories, offices and other commercial buildings, warehouses, parking decks and similar) starting in 2022. Only thanks to BSW Solar’s intervention do these rules now include section 8a, which makes clear that the new solar energy requirements can also be fulfilled by a field of solar thermal collectors. But instead of introducing regulations which allow solar thermal collectors as an alternative to PV panels, the country needs real solar obligations requiring the installation of either a solar heat or a PV system, or a combination of both. That would be the only equitable solution, according to Drück. “Whenever the discussion turns to German solar obligations, we need to speak out in favour of technologically neutral regulations,” he told the participants of the webinar.
Organisations mentioned in this article:
https://www.iea-shc.org/
https://www.iea-shc.org/solar-academy
https://www.igte.uni-stuttgart.de/en/
https://www.solites.de/en/
https://www.solarwirtschaft.de/en/home/
https://www.iea-shc.org/solar-heat-worldwide
https://www.bdh-industrie.de/en/
District Heating
Domestic Hot Water and Heating
Finance and Incentives
Germany
IEA SHC Solar Academy
webinar
market opportunities