Each year since 2012, the German Federal Ecodesign Award has been awarding prizes to organisations and individuals creating sustainable products, services and concepts which stand out by their design. Companies, design agencies, start-ups and students are all invited to submit innovative solutions. The One World Solar Collector (see figure) was the first solar heating product to receive such an award. In 2015, 288 project applications were submitted across four categories: Product, Service, Concept and Young Talent. Around half of them got through the first round, and 33 projects were nominated in the end. “The One World Solar Collector consists mainly of plastic instead of metals such as copper and aluminium and thus offers a cost-effective and resource-saving alternative to conventional solar collectors. The cost advantages outweigh the slightly lower efficiency of this type of collector, in particular when used in emerging and developing countries,” the jury explained their choice. The winners will be featured in the online exhibition on the Federal Award web page and take part in an exhibition tour that will make a stop at fairs, technology museums and consumer events. 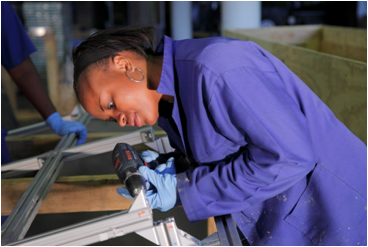 Every two years since 2009, the German Innovation Prize for Climate and Environment (IKU) has been awarded for outstanding innovations in the field of climate and environmental efforts across different categories, such as Process Innovations, Products, Services and Technology Transfer. Industrial Solar received the award, which includes a prize money of EUR 25,000, jointly from Federal Environment Minister Hendriks and Holger Lösch, member of the Executive Board of the Federation of German Industries, BDI. Professor Klaus Töpfer, former Executive Director of United Nations Environment Programme (UNEP), used his speech to underline the importance of technologies which can be employed globally to solve problems anywhere in the world. Industrial Solar has planned, designed and set up solar thermal Fresnel collector systems for industrial process heat and solar cooling in eight countries around the world, for example, in Germany, Italy, Jordan, Qatar and Tunisia. “We focus on training our partners and on achieving a high added value in emerging markets,” confirms Tobias Schwind, one of the company’s managing directors. The photo above shows the temporary assembly of mirrors for a solar cooling project in South Africa. In a temporary local workshop, the glass mirrors are bent and then glued onto a metal backside structure.