The SOCOL network has become more involved than ever in shaping the future of the French solar thermal sector, having grown quickly from just 155 experts in 2013 to 2,500 today. Great efforts are being made to improve the image of solar thermal as a cost-effective, reliable technology for commercial applications. Despite the favourable environment, the French market has experienced a notable decline over recent years. Preliminary data from 2017 shows the newly installed collector to have been as little as 50,000 m², a decrease of 15 % compared to the year prior. Only multi-family properties and large-scale systems seem to be bucking the trend.
Source: Uniclima
“2017 seems to have been the first year in which the solar thermal market for multi-family properties has shown at least some signs of recovery, especially in light of the overall downward trend,” said Edwige Porcheyre, Project Manager at French solar industry association Enerplan and coordinator of the SOCOL network. The development has since been confirmed in Enerplan interviews with several regional offices of France’s national energy agency ADEME.

France’s annual solar thermal market
Source: Uniclima
*Preliminary data
Massive promotional efforts
To regain the levels of the recent past, the French solar thermal sector needs to be much more visible to commercial clients. Porcheyre said: “Potential project developers should be made aware that the solar heat industry has worked hard to achieve high efficiency and reliability. For instance, we have undertaken massive efforts to promote solar district heating, which has prompted orders for several new plants.”
The SOCOL coordinator also emphasised that there should be tighter restrictions on energy consumption in commercial newbuilds. About 80 % of the newly installed collector area in France is set up on new buildings, although the Réglementation Thermique RT 2012 building regulations are not very conducive to renewable development in general. Newly constructed multi-family buildings continue to be allowed 57.5 kWh/m² instead of being forced to comply with the lower limit of 50 kWh/m², which was set for owners of single-family homes in 2015. Additionally, the government papers contain no requirement for producing renewable heat. On top of this, the French Ministry of Housing has just extended the exemption for another two years. 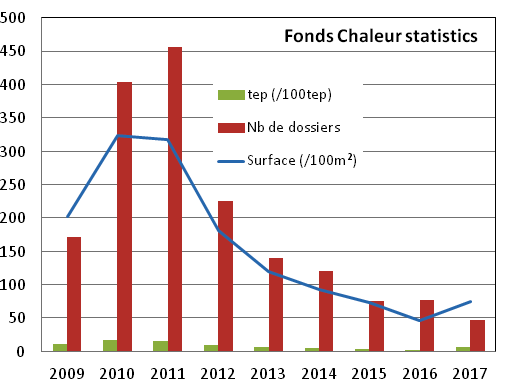 Fonds Chaleur’s application numbers over the years
Source: ADEME
The number of applications to Fonds Chaleur reflects the downward trend on the market. Since the peak year of 2011, it has decreased year after year. The 2017 increase to 7,452 m² in subsidised collector area has been the result of a shift towards larger-sized fields of on average 150 m² per installation.
Nadine Berthomieu, who manages the solar heat division and Fonds Chaleur at ADEME, said that there were plans to make some changes to the funding scheme. Alongside revised carbon taxation, which will increase gradually from 44.60 EUR/tonne in 2018 to 86.20 EUR/tonne in 2022, solar thermal incentives may be reduced starting in 2019. Meanwhile, there have also been discussions about a 1,000 EUR/m² cap on the eligible investment costs.
Porcheyre regards the national carbon tax (CCE = Contribution Climat Énergie) as an indirect incentive to produce solar heat. “We’ve been emphasising the fact that the installation of solar thermal avoids CO2 emissions and saves money in the process.” An Enerplan calculation based on 2018’s carbon tax level of EUR 44.60 per tonne showed that replacing a gas boiler operating at 80 % efficiency with a solar thermal system will save around EUR 14 in CO2 taxes when producing 1 MWh of heat.
The article was written by Riccardo Battisti, a solar thermal consultant and market researcher working at Ambiente Italia (Rome, Italy).
Websites of organisations mentioned in this article:
Enerplan: www.enerplan.asso.fr/
ADEME: www.ademe.fr/en
SOCOL: www.solaire-collectif.fr/
SOCOL brochure: www.solaire-collectif.fr/ftp/article/615/LIVRET-SOCOL-12pages.PDF
News
France
multi-family buildings
market development
Réglementation Thermique RT 2012
Fonds Chaleur
Uniclima
Enerplan
ADEME
SoCol Network
Ambiente Italia