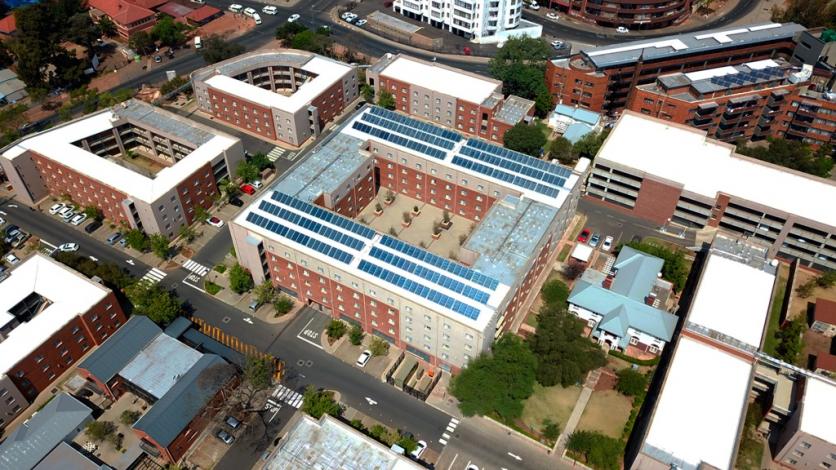 On 15 May, the Austrian Ambassador to South Africa inaugurated two landmark projects that had received support from SOLTRAIN, the Southern African Solar Thermal Training and Demonstration Initiative, during planning and installation. One became the first solar district heating plant in Sub-Saharan Africa (see photo) and the other the region’s largest solar process heat system. While the former, a 600 m² flat plate collector array, was installed on the roof of a Witwatersrand University building in Johannesburg, the latter was put up at the Klein Karoo tannery in Oudtshoorn, 400 km east of Cape Town. Both were inaugurated after representatives for all SADC countries and the solar sector had met on 14 May for the fourth SOLTRAIN Conference.
Photo: Holms and Friends
“SOLTRAIN is AEE INTEC’s most important and most successful project on know-how transfer around the world,” said Werner Weiss, Director of the Austrian-based AEE – Institute for Sustainable Technologies (AEE INTEC). “We are proud of having supported our South African partners in designing and constructing two impressive solar thermal systems.” The success of these ventures has recently led to another extension of the project, which is now its fourth iteration, scheduled to run between July 2019 and December 2022. SOLTRAIN focuses on capacity building and the demonstration of solar thermal technology across the Southern African Development Community (SADC).
In South Africa, SOLTRAIN is operated by the Centre for Renewable and Sustainable Energy Studies (CRSES) at Stellenbosch University and the South African National Energy Development Institute (SANEDI), in partnership with AEE INTEC. It is co-financed by the Austrian Development Agency (ADA) and the OPEC Fund for International Development (OFID).
Solar district heating for student accommodation
The district heating system at the university consists of a gas-fired combined heat and power (CHP) plant and a 600 m² solar field made up of large 10 m² collectors. Its heating centre meets hot water demand in 14 buildings, which accommodate about 1,100 medical students, who need an average of 94,000 litres a day. Demand peaks in the morning hours, when it is about 30 % of daily consumption, at a maximum of 28,200 litres an hour. Since August 2018, all the hot water required in these buildings, including in the kitchens and laundry rooms, is supplied by way of district heating. The new installation replaced 150 solar water heaters, which had run simultaneously but had failed to keep up with demand, so that 3 kW electric elements in each unit had previously supplied most of the hot water.
“The new hybrid system combines the advantages of both technologies: the low cost of operating a solar thermal system and the capability of CHP to meet baseload requirements,” said Wally Weber, Managing Director of BlackDot Energy, the South African engineering firm acting as project leader. Another long-time solar water heater company, Holms and Friends, installed the collectors on site.
“In the first eight months of operating the system, we have seen the number of student complaints about not having hot water drop by 98 %,” said Weber, adding that a monitoring device had been recording solar yields from the very first day after the installation had been commissioned. The monitoring data from the first few months confirms an annual yield of 895 kWh/m².
Since the system was installed, hot water supply has been steady, with only minor interruptions because of municipal supply shortages and debris blocking the water flow in the circulation pumps. Plans are to add a cold-water storage tank as a backup to prevent a shortage of hot water caused by problems with the municipal water distribution system.
According to a Soltrain press release, the university will save an estimated South African Rand (ZAR) 40 million in 20 years, based on an annual 8 % increase in electricity prices. These savings will be due to lower electricity consumption for hot water preparation and lower maintenance costs thanks to a centralised system. Additionally, the cost of electricity generated by the CHP plant has been at near-parity with that supplied by the grid, which means heat is produced for “free”, bringing overall CHP costs down to 37 % of those of the electrical grid.
Industrial solar heat pays off in 6.5 years 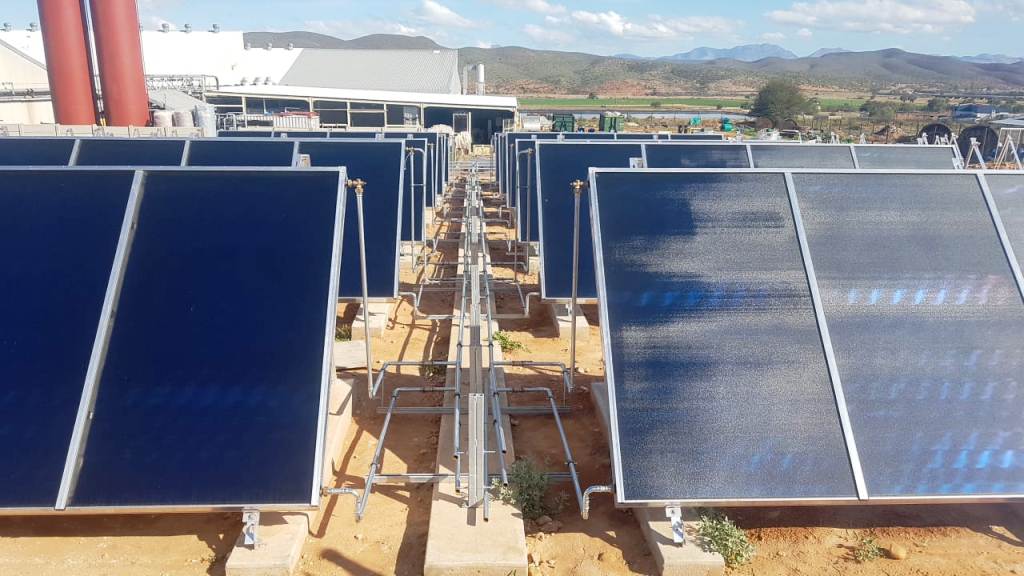 The 600 m2 of collectors installed at Klein Karoo meet 55 % of the tannery's heating needs. These ground-mounted units produce 10 % more than they would have if they had been installed on its factory roof.
Photo: E3 Energy
To cut costs and sharpen its competitive edge, the tannery Klein Karroo installed the solar process heat system on its premises, as fuel costs are subject to large fluctuations. It also established a long-term strategy to increase its renewable energy generation capacity. “Stellenbosch University, a SOLTRAIN partner, approached various tanneries and Klein Karroo was the most forthcoming and had the budget to contribute to the study,” said Doran Schoeman, Managing Director of E3 Energy, which built the solar process heat system. “Tanneries need temperatures of between 35 °C and 60 °C, making flat plate collectors ideal for this sort of application. However, the large quantities of hot water required each day have proved challenging.”
The factory uses L010 paraffin oil, which became 40 % more expensive over the last two years. This made solar energy economically attractive to management. The Stellenbosch researchers estimated a payback period of 6.5 years at a 60 % solar fraction. Their simulation model is based on a feasibility study that examined maintenance, finance costs and all system-related expenses. 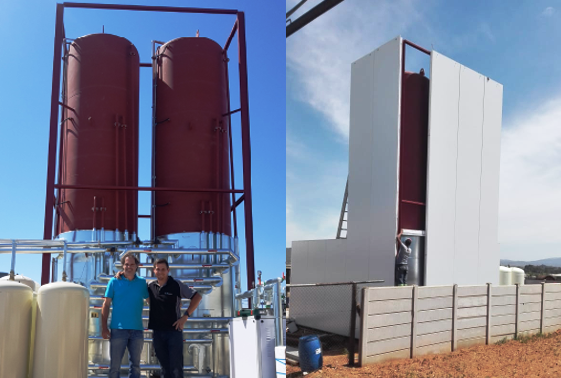