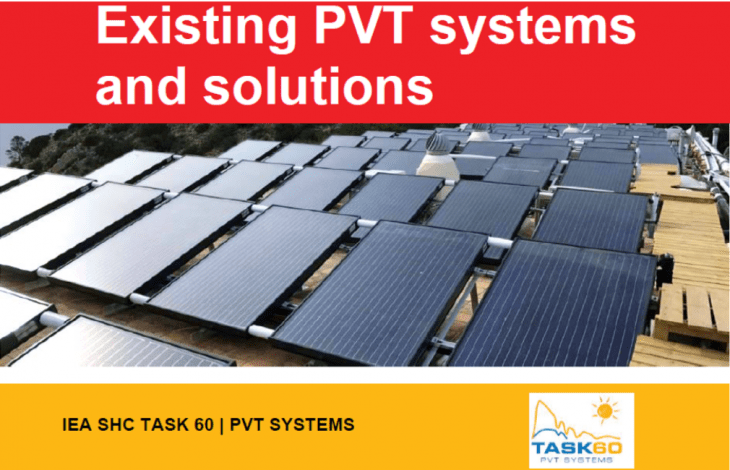 PV-thermal installations are extremely versatile systems, and their manufacturers can cater to a wide variety of customers, single- and multi-family building owners, hotels, swimming pools and even production facilities among them. To illustrate how far PVT technology has come in recent years, global research platform Task 60, Application of PVT collectors, included 30 case studies in its latest report, Existing PVT systems and solutions (see the attached document). The first chapter of the document, published in May, provides an overview of PVT deployment around the world. It is based on a PVT manufacturer survey on which solarthermalworld.org reported in this news item.
Each case study consists of a general description and a hydraulic scheme, as well as a photo and a table containing key system parameters. The four-page fact sheets were drawn up by Task 60 industry and research participants from 10 countries, namely the UK, Switzerland, Spain, the Netherlands, Italy, France, Germany, Denmark, the Czech Republic and Australia.
“As PVT is still a new technology, the fact sheets are hoped to motivate building owners to take a look at this option when they see that hotels or swimming pools are using it successfully,” explained Jean-Christophe Hadorn, Leader of Task 60. 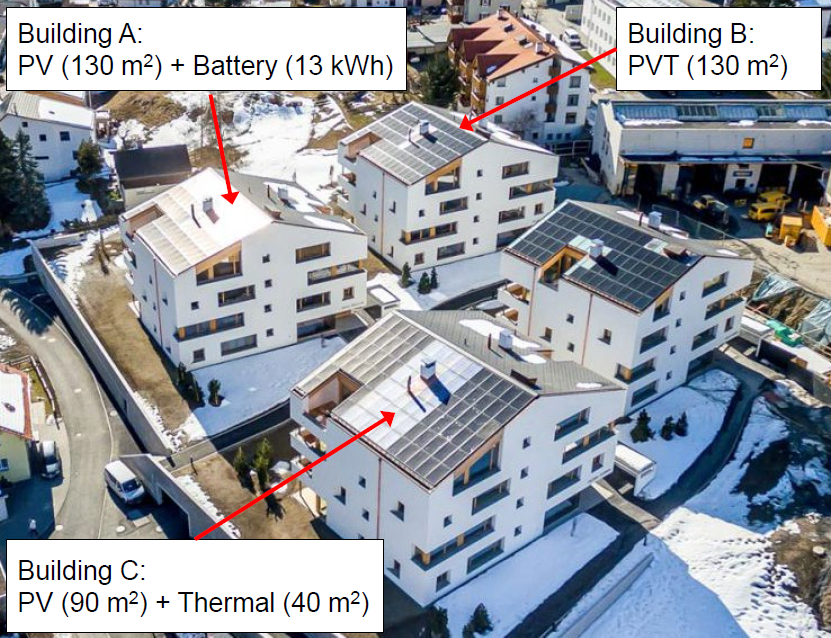 The photo shows a multi-family housing complex in Sotcha, Switzerland, and information about its range of rooftop solar systems. Photo: SPF Rapperswil
One thoroughly monitored project among the case studies is a housing complex in Switzerland’s alpine region. The complex is comprised of three identical multi-family buildings. Each building has the same highly efficient building envelope, the same number of flats, and a heat pump that relies on a storage system with five boreholes. Only their rooftop solar installations differ (see the photo above). Block B and C use solar heat for borehole regeneration as well as domestic hot water and space heating.
“If you add up the solar thermal and electricity yields per square meter, you will see that the PVT roof generates 33 % more kilowatt-hours of solar energy,” said Thomas Ramschak, who works at Austrian-based AEE INTEC, the organisation that compiled the fact sheets. 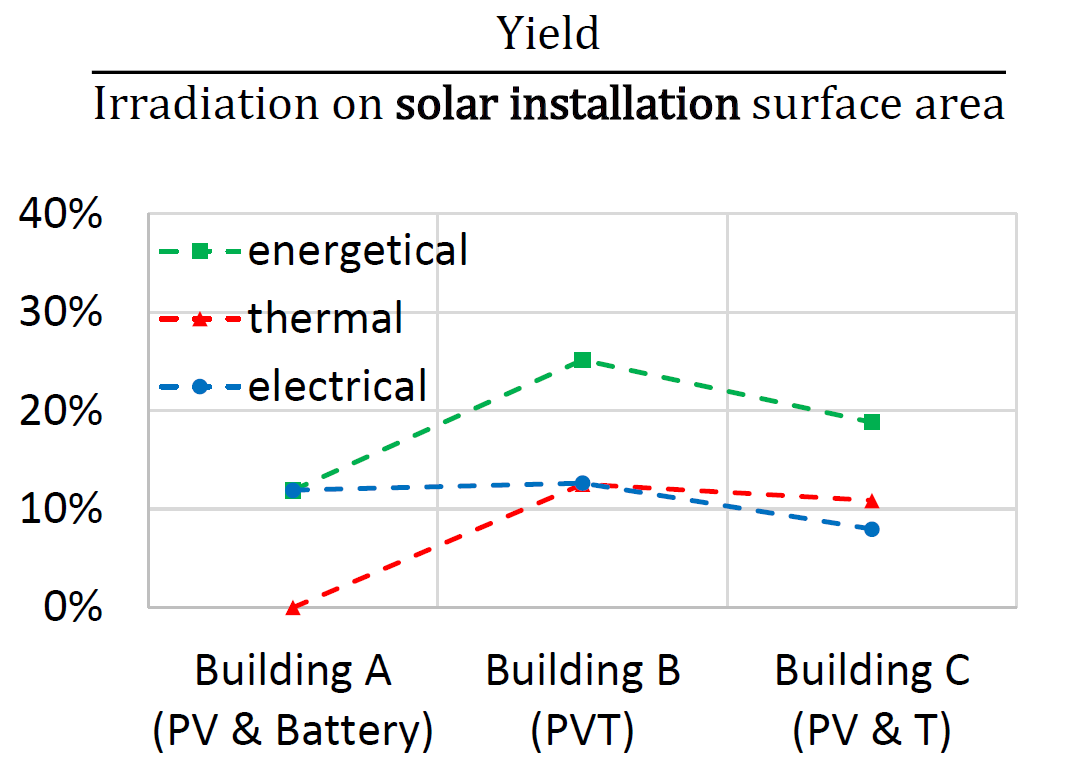 PVT has the highest output when adding together thermal and electrical yields across the roof area covered by solar systems. Chart: Task 60 - SPF
“This list of PVT systems in operation is a particularly valuable data resource, since most of the fact sheets include technical, economic and operational parameters, allowing comparisons between key performance indicators,” explained Daniel Zenhäusern from the Swiss-based SPF Institute for Solar Technology. He had already presented some of the report’s findings during the IEA SHC Solar Academy webinar held in March. Another report, titled Evaluation of PVT systems in operation, is currently being drafted and will be published most likely at the end of this year.
To illustrate the impact of individual applications on PVT solar thermal yield, the researchers plotted the specific solar thermal yield as a function of collector operating temperature (see the chart below). “As expected, lower operating temperatures resulted in higher yields,” Zenhäusern noted in light of the clear trend in the chart. 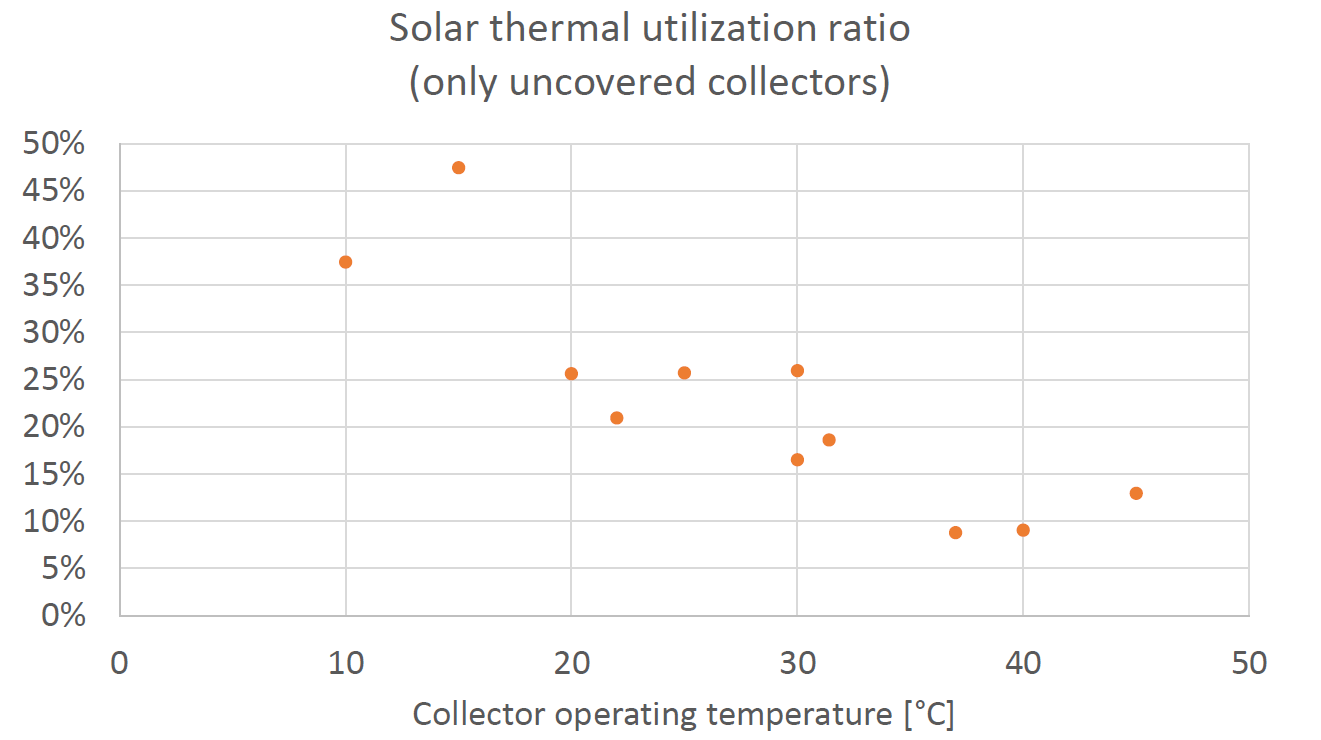 Comparing solar thermal yields based on PVT operating temperature. The solar thermal utilization ratio is synonymous with the specific solar yield in kWh/m2. Chart: Task 60
Investment costs are available for 11 of the 30 case studies, ranging from 400 EUR/m2 to more than 1,600 EUR/m2, at an average of around 1,200 EUR/m2, Zenhäusern said at the webinar. The spread of the values can be partly explained by the difference in location and climate. The listing might also include some pilot systems. The number of projects for which cost data was included is still too small to confirm that specific costs are lower the larger a system is, often a true statement regarding solar systems.
Organisations mentioned in this article:
IEA SHC: www.iea-shc.org
Task 60: http://task60.iea-shc.org/
PVT Wiki: https://en.wikipedia.org/wiki/Photovoltaic_thermal_hybrid_solar_collector
AEE INTEC: www.aee-intec.at
PVT webinar within Solar Academy: https://www.iea-shc.org/solar-academy/webinar/pvt-systems-task-60
SPF Institute for Solar Technology: www.spf.ch