Last year, the amount of newly installed glazed collector area added up to 2.7 million m² (1.9 GWth) in the European Union’s E28 and Switzerland combined. It is another decline compared to the previous year, this time by 7 %. The annual market statistics of the European Solar Thermal Industry Federation (ESTIF) show 23,700 people to have been employed by the solar thermal sector Europe-wide, whereas turnover was EUR 1.9 billion overall. The four-page market survey published in November includes the country-specific figures of all 28 EU countries and Switzerland. Most of the data was provided by national associations, energy agencies or industry companies, although the markets of six smaller countries were estimated by the ESTIF team. The survey can be downloaded by filling in a form on the organisation’s website. A full report will be available to ESTIF members in early December.
Figure: ESTIF
The six largest markets in Europe have developed fairly differently over the last years. Denmark’s more than doubled between 2012 and 2015 because of an increasing number of large-scale district heating plants, and the country is now in fourth place behind Germany, Poland and Greece. With this year’s 467,000 m² of newly installed collector area as of September 2016, Denmark continues to experience strong growth. The Greek market did well – despite the financial crisis in the country – and gained 12 % over the last four years. The market in Germany and the one in Italy have dropped by 31 % and 30 % respectively since 2012. Italy’s market fell down the ranks and wound up at the bottom of the list of Europe’s largest markets. 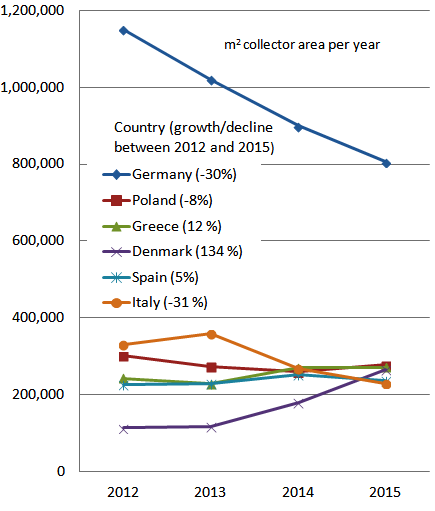 Newly installed collector area of the largest six countries in Europe between 2012 and 2015.
Source: ESTIF
The European market has declined steadily since the peak year of 2008 – not too long ago, in 2013, it contracted by 9.8 %, then by 7.1 % in 2014 and by 6.6 % last year. ESTIF pointed out in its study that solar heating and cooling was not matching its potential: “Pushed by strong support policies, renewable electricity has risen to 27.4 % of all power generation in Europe, whereas renewable heating and cooling represents only 17.7 % of the heating and cooling demand in Europe.” The chart below shows that most countries still have a long way to go to meet the 2020 targets of their National Renewable Energy Action Plans. 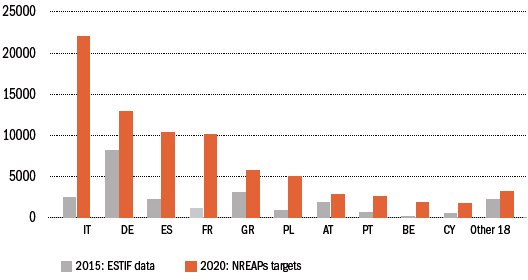