The German-based Solar Heating Initiative has developed a new calculation method to label solar thermal systems based on the Ecodesign Directive 2005/32/EC. It put the method, which allows for a fair assessment of solar thermal energy input into a heating system, forward for consideration in February, at a stakeholder meeting organised by Dutch-based consultancy Van Holsteijn en Kemna, also known as VHK. Together with BRG Building Solutions, the company has been appointed by the European Commission to carry out a review of the eco-design and labelling regulations on water heaters and tanks.
Image: Solar Heating Initiative
At present, VHK is gathering, assessing and publishing comments by several associations. Its study is said to be available in April 2019.
The European solar thermal industry hopes that revised regulations will remove some of the disadvantages which the current labelling framework has put on solar thermal technologies.
This approach had resulted in the unfair treatment of zero-carbon solar thermal technology, several experts commented during the VHK-moderated stakeholder process.
“Solar systems evaluated based on current package label requirements usually achieve no more than A+, which can as well be accomplished by a gas condensing boiler and controls without a solar unit,” Stefan Abrecht, Managing Director of German-based Solar Experience and one of the coordinators of the Solar Heating Initiative, said about the classification dilemma. “Heat pumps have a unique selling point, as they achieve A++ and A+++ ratings for heating. They alone represent the best of technology for everyone to see, which also influences the political landscape.”
Abrecht called for a paradigm shift: “Solar devices need to be classified as heaters.” The consultant has developed a new yield-oriented method to evaluate solar systems. It can also be applied to solar retrofits. His approach is based on the widely recognized German energy efficiency standard DIN V 18599, which specifies heating, cooling and hot water requirements for buildings.
First, Abrecht defined a reference building which requires a certain amount of space heating and hot water. Many eco-design methods, such as the one to classify hot water heat pumps, use some sort of reference load profile. He then determined the maximum collector area necessary to meet the yearly heat demand of the reference building. “This area Amax is only a theoretical value. It is the result of dividing reference heat demand by the specific collector yield listed on the Solar Keymark certificate,” Abrecht explained.
Afterwards, the consultant identified the collector area required to provide a certain solar fraction for the reference building. He specified the area as a proportion of Amax and called it area fraction (fA). He found characteristic fA curves, which are close together despite representing very different collector types (see chart 1 below). Thus, only one collector curve with a coefficient of a1 > 2,5 W/m²K and one with a1 ≤ 2,5 W/m²K is needed (see chart 2 below). “One of these two fA curves can be used for each collector type at reasonable accuracy and allows for the determination of the solar fraction across a large variety of solar system sizes,” Abrecht explained. 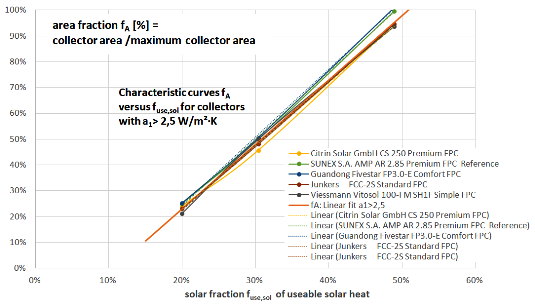 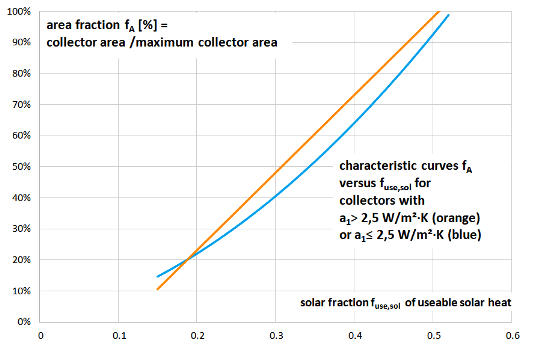 Chart 2: Two characteristic fA curves are used to determine the solar fraction of a specific collector system.
Source: Solar Heating Initiative
At this point, all the preliminary work has been done to set up an Excel file, which includes the method for the labelling regulation. The user chooses the collector area and a collector type, after which the total heat demand for the reference building is divided by the specific collector yield to result in fA. The sample curves help to find the solar fraction, which can then be multiplied with the reference heat load to calculate the useful solar heat. Only the remaining heat demand will need to be met by the boiler.
“With this approach, the solar thermal system becomes the number one CO2-saving heater, exactly what we have said all along,” Abrecht explained. The method can also be used for solar thermal retrofits, for which the solar heat value is used to calculate the reduction in energy consumed by the boiler. Abrecht confirmed that “this is a similar approach as the package label for water heaters combined with solar devices and therefore fits the EU assessment scheme”.
Greek industry association EBHE has been the first to comment on the new approach. “We support the Solar Heating Initiative’s proposal for a fairer calculation and labelling of solar systems,” EBHE’s chairman, Efthymios Spanos, wrote in a letter dated 30 March 2018 and sent to VHK.
Organisations mentioned in the article:
https://solar-heating-initiative.com/
https://www.vhk.nl/
http://www.ebhe.gr/
News
Certification
Standards
Germany
Netherlands
Europe
Greece
EDD
Solar Heating Initiative
VHK
BRG Building Solutions
Solar Experience
EBHE