Skip to main content
Sign up for newsletter
Follow us
Advanced search
This July, SP issued new Solar Keymark certificates for four Danish Arcon-Sunmark collectors after the Swedish test lab and certification body had retested these four systems in April. The retesting had been necessary, as SP had received six complaints because of a lower-than-expected c1 (heat loss coefficient) value on certificates issued in November 2015. At first, it looked like a case closed, but the stakeholders who submitted complaints are now calling for a reform of the complaint procedures and tolerances established by the Solar Keymark Network (SKN).
In a letter dated 8 July 2016, SP explained to the six complainants that the four November 2015 certificates – SP SC0840-14, SP SC0841-14, SP SC0842-14 and SP SC0843-14 – were valid because “the differences between previous and new performance test results are well within the laboratory’s measurement uncertainty and, thus, well within the 10 % limit according to the Solar Keymark scheme rules.” SP referred in its letter to a statement by TÜV Rheinland, in which Ulrich Fritzsche, Senior Expert Solar Thermal Testing at the organisation, had confirmed that except for some minor listed findings, there were “no findings questioning the conformity of the witnessed tests with clauses 20 to 27 of standard EN ISO 9806:2013.” Because SP named Fritzsche as a third-party expert, his report has not been available to the public.
In SP’s view, there was no need for further action after the retests had been carried out. However, the institute’s client and the manufacturer of the retested collectors, Arcon-Sunmark, requested the issuance of new certificates based on the new test results. These four certificates were published on 14 July and replaced the old ones in the online database of Solar Keymark certificates. “Tests are subject to measurement uncertainties, which means that the results will always differ slightly from one test to the next,” Søren Elisiussen, CEO of Arcon-Sunmark, explained when contacted by solarthermalworld.org. “What is important is that they were all well within established parameters.”
Certificates compared
“The performance coefficients are now a lot closer to the expected results,” Stefan Abrecht, General Manager of German company Solar Experience, said after using the aperture area as a basis for comparing the new with the old certificates (see the following table). But he also pointed to the improved performance of the non-foil model HTHeatboost 35/10, which has an unusually high incidence angle modifier (IAM) of 0.98 Kd for diffuse irradiance. The IAM describes which amount of diffuse solar radiation on the collector surface contributes to thermal conversion compared to direct irradiance. Typical values for flat plate collectors are significantly lower: They range from 0.89 to 0.93. When asked about the table, Staffan Ljung, Media Relations Manager at SP, replied: “Please understand that SP cannot comment on the details of the test results because of confidentiality obligations to our client.” 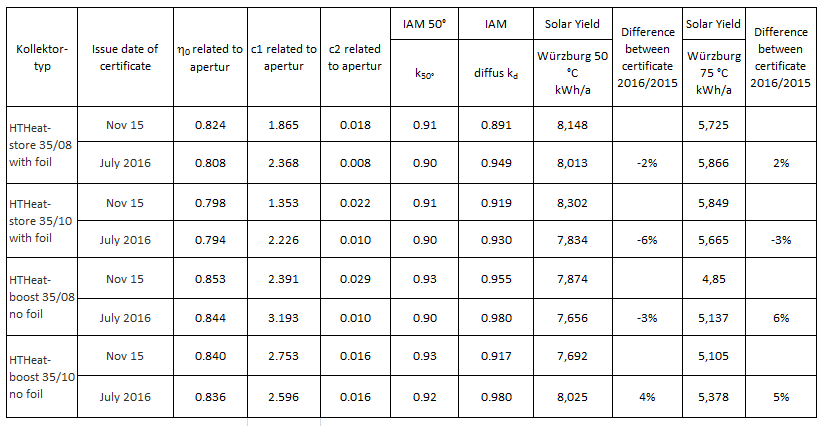 Comparison between the November 2015 certificates and the current ones from July 2016. All performance coefficients are based on aperture area. The solar yield refers to the collector module.
Source: Solar Experience
Improving SKN rules
Carsten Lampe, head of the test lab at the Institute for Solar Energy Research Hamelin, ISFH, corroborated Abrecht’s analysis and emphasised the fact that three of the four collectors performed even better at 75 °C on the new certificates. Their increased c1 values showed a close correlation to the reduced c2 figures. But Lampe also urged to take a broader view: “To increase transparency, I would have preferred that retesting had been done at a different lab. The important thing now is that the Solar Keymark Network improves the rules.”
A new set of SKN rules is exactly what Robin Welling, Managing Director of Austrian collector manufacturer Tisun, another one of the complainants besides ISFH, has been aiming for: “The 10 % tolerance in the solar yield of a collector model is definitely too high and results in the distortion of competition when tendering for large-scale collector fields.” According to Welling, stricter and clearer rules would be necessary to decide under which circumstances suspicious-looking certificates could be taken off the online database. Robert Kanduth, Managing Director of Austrian collector manufacturer Greenonetec and Chair of the industry association Austria Solar considered the current complaint procedures to be “dissatisfactory”. Austria Solar decided to support the reforms within the network by sending an expert to the next SKN meeting on 17/18 October on the Greek island of Crete. There, a working group created during the March SKN meeting in Berlin will present its draft for new complaint procedures.
Websites of companies and institutions mentioned in the article:
Solar Keymark Network: http://www.estif.org/solarkeymark/network.php
Tisun: http://www.tisun.com/home/
ISFH: http://www.isfh.de/?dm=1&_l=1
Greenonetec: http://www.greenonetec.com/en/
Austria Solar: http://www.solarwaerme.at/ (in German)
SP: www.sp.se
Arcon-Solar: www.arcon-sunmark.com
News
Certification
Denmark
Sweden
Germany
Austria
Solar Keymark Network
complaint procedures
Arcon-Sunmark
SP
TÜV Rheinland
Solar Experience
Solar Energy Research Hamelin
Tisun
Greenonetec
Austria Solar