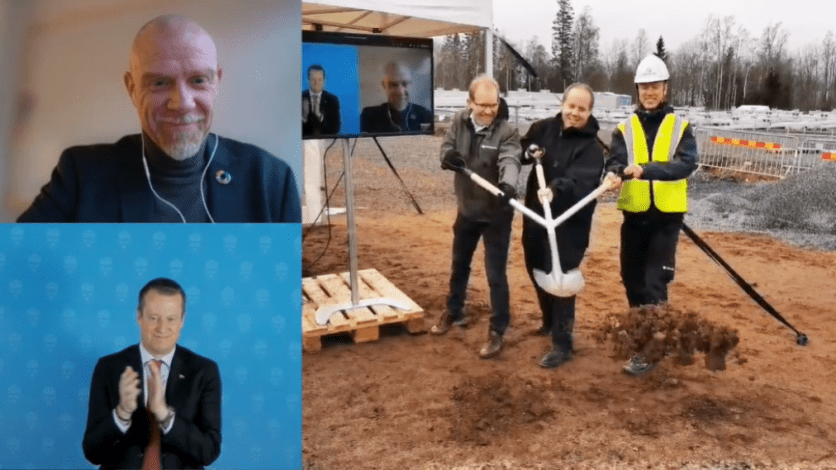 In November, construction began on what will be Sweden’s largest district heating system based on solar concentrating technology. This 3,000 m2 field of parabolic trough collectors (1.5 MWth) is part of a EUR 1.6 million demonstration project that will receive 48 % of its funding from Sweden’s Energy Agency and will run until 2023. On 28 October, at the ground-breaking ceremony, Sweden’s energy minister Anders Ygeman (bottom left) lauded the initiative, saying the project shows once again how serious Swedish companies are about climate action.
Photo taken from Vimeo video: https://vimeo.com/475839779
Initiator and developer of the solar district heating plant is Absolicon Solar Collector, the maker of a covered parabolic trough collector called T160 and the supplier of complete production lines for this sort of equipment. The customer of Absolicon, based in Härnösand, 400 kilometres north of Stockholm, is utility Härnösand Energi & Miljö, also known as HEMAB, the owner and operator of the town’s DH network. Another partner in Absolicon’s new project is Umeå University, which is carrying out third-party monitoring and validation together with the Research Institutes of Sweden (RISE).
Absolicon will contribute EUR 832,000 to the construction of the demonstration plant and serve as an Energy Service Company (ESCO) by later selling solar heat to HEMAB. The project is called Högslätten 2023, a nod to the name of the site where the solar field will be built. Earlier this year, potential SDH locations in the region were surveyed as part of the Future District Heating study, which was when the choice fell on Härnösand.
Multi-phase construction
“The project involves the construction and commissioning of a 3,000 m2 solar field made up of T160 collectors, plus third-party evaluation of the collectors, the system and its interplay with the DH grid,” said Benjamin Ahlgren, Project Manager at Absolicon. Hence, the field will be commissioned in phases. An initial 0.5 MWth will be started up as early as spring 2021. “The gradual start of operations will give us the opportunity to use the first-phase monitoring results as lessons learned in designing the next,” explained Ahlgren.
Key figures on HEMAB district heating network in Härnösand, Sweden
Source: Absolicon 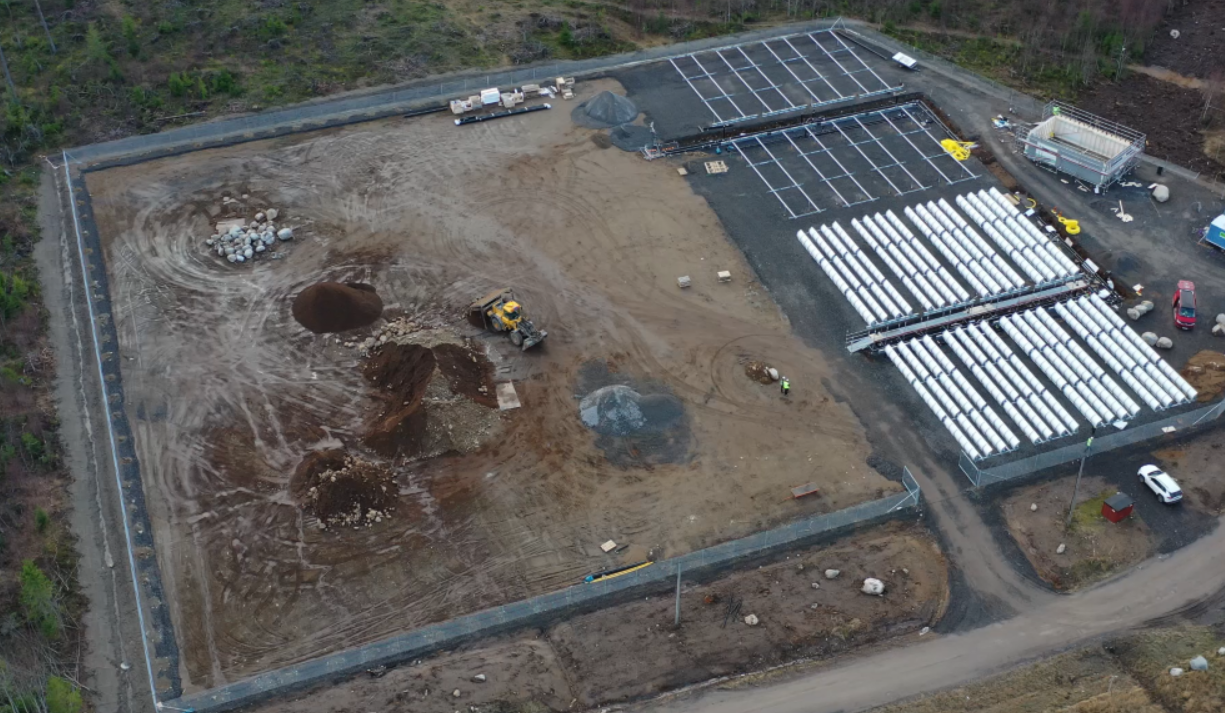 A bird’s eye view of the construction site in Härnösand. The photo shows half of the 192 collectors mounted in the first phase. Photo: Lars Wahlström/Absolicon
The T160 field will supply heat directly to the grid without storage, since the solar contribution of the demonstration plant is small (as low as 1 %) compared to the yearly amount of heat that HEMAB wants to provide. At its peak in summer, however, the system can cover about a fourth of the required heat capacity. As soon as the 3,000 m2 solar is completed, the field will supply 1.1 GWh annually, said Absolicon. This corresponds to a specific annual yield of 360 kWh per m2 of aperture area.
In addition, the solar field will follow the operation curve of the grid. “This is one of the great benefits concentrators have, namely that efficiency is less influenced by higher operation temperatures, and this gives us the opportunity to offer customers solar heat at varying temperatures,” said Ahlgren. If the demonstration project is a success, the partners have stated that they will consider providing an even larger share of Härnösand’s DH heat via solar energy.
Organisations mentioned in this article:
Absolicon Solar Collector: https://www.absolicon.com/
Härnösand Energi & Miljö (HEMAB): https://www.hemab.se/
Swedish Energy Agency: http://www.energimyndigheten.se/en/
Videos about the demonstration system: https://vimeo.com/475839779 and
https://vimeo.com/474621835
News
District Heating
Sweden
Solar Heat for Cities
parabolic trough collector
European Copper Institute
Absolicon Solar Collector
HEMAB
Swedish Energy Agency