Many building owners consider roof-integrated solar systems to be a tried-and-true way of saving as much on their heating bills as they can. A research project called solSPONGEhigh and developed in Austria has shown: When using thermal mass, i.e., the capacity of a building to store heat in ceilings, walls and foundations, solar technology can meet more than half of the yearly demand for space heating and hot water – large storage tanks not required. During construction of the house, meander-shaped piping, like the one in an underfloor heating system, is installed near the steel beams inside concrete slabs (see image).
Photo: Private
Solar energy flows through these pipes to be stored in the surrounding concrete, which acts as the sole, cost-effective heating system in the house.
Researchers at the AEE INTEC – Institute for Sustainable Technologies and the IWT – Institute of Thermal Engineering at the Graz University of Technology, both research facilities based in Austria, have employed computer models to investigate several types of structures as well as building services including active thermal mass systems to determine the cost and amount of the solar contribution.
Initial results show great potential. A 20 m² solar thermal field is enough to supply considerably more than half of the amount of heat and hot water usually required in a low-energy home, and if 40 m² of solar thermal collectors were to be combined with a brine-to-water heat pump, the slabs to store and release heat could even provide as much as 80 % (see the chart below).
On the other hand, if a building owner decides on a PV system and a heat pump, currently a very popular combination in newbuilds, he or she will have to be content with a much lower percentage. A 20 m² PV system and an air-to-water heat pump will meet only 24 % of annual heat demand. Even a 60 m² PV installation cannot achieve values above 42 %. 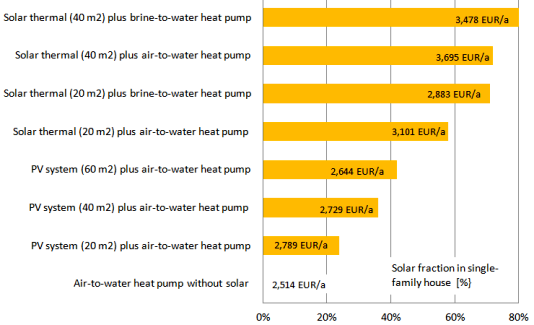 Results from simulating several options for building services, including active thermal mass systems, in a low-energy home. The figures in the bars denote the annuities per year that means the net present value of the investment.
Source: AEE INTEC and IWT
Solar thermal meets higher solar fraction with smaller areas
Many customers, however, place as much importance on costs as they do on environmental benefits. This is where solar electricity can score some points, especially because feed-in tariffs pay for excess power. A 60 m² PV system and a heat pump running over 25 years will result in annuities of EUR 2,644 per year. In this case, solar energy will meet 42 % of demand (see the figure above), whereas a 20 m² solar thermal system and a heat pump will require an average of EUR 3,101 each year. But despite the smaller surface area, the solar thermal collectors will raise the solar fraction to 58 %.
If there were no PV feed-in tariffs, a combination of solar thermal and heat pumps would, in addition to using the surface area much more efficiently, be a lot more economical. A 60 m² PV system plus an air-to-water heat pump would cost EUR 3,511 each year while providing a solar fraction of 42 %. By contrast, the annuity payment for a 20 m² solar thermal field would be as little as EUR 3,101 and the system would meet 58 % of demand.
Solar fractions up to 59 % in multi-family buildings
If floors and ceilings are used to store solar energy, owners of multi-family property can reap nearly the same benefits. The only disadvantage is that less roof space is available compared to the number of rooms which need to be heated. The computer simulations did not see the solar fraction exceeding 59 % for a multi-family low-energy building equipped with a 125 m² solar field. What has been said about individual homes, however, is just as true: At the same solar field size, PV-driven heat pumps achieve a much lower proportion, 48 % to be precise.
Nevertheless, the feed-in tariffs will lead to an even greater difference between PV and solar thermal annuities for these types of structures, with the latter being twice as high as the former (see the figure below). 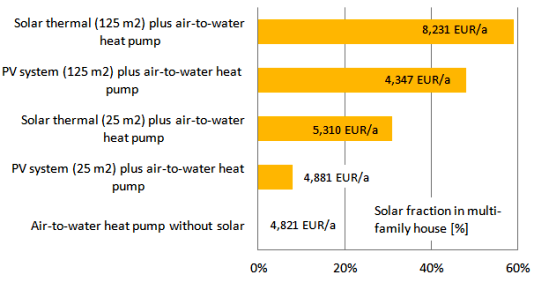