Pampa Elvira Solar (PES) operates the largest solar process heat installation worldwide, a 27.5 MWth collector field at the Gabriela Mistral mine in Chile. “It´s an every-day, every-hour struggle to harvest the sun and earn our wages, so we may continue the very humble – and much too often neglected – business of running a solar heat-delivering system in the middle of the desert,” said Ian Nelson, General Manager of Pampa Elvira Solar. Solarthermalworld.org spoke with him about dust problems, the opportunities of concentrating collectors, the challenges of ESCO operation and improved copper cathodes. Five-and-a-half years ago, the engineer started at Energía Llaima, an independent producer of hydro and solar thermal solutions. PES, which was founded in 2012, is a consortium of Danish company Arcon-Sunmark and Energía Llaima.
Photo: Pampa Elvira Solar
Solarthermalworld.org: The 27.5 MWth field at Gabriela Mistral mine has reached a specific yield of 1,112 kWh/m² annually. How does dust reduce efficiency?
Nelson: Dust has certainly been a problem and because the field is within the mining area, it is affected as well. Obviously, the plant was built by taking into account the predominant wind direction, but it has its natural variation and there are recurrent problems with the dust abatement used on the mine’s grinders and crushers as well as internal roads. Still, there are sometimes dust swirls and winds with speeds of over 130 km/h. On top of that, the dust is a mixture of salt, clay and silicates. We have tried several devices, methods, cleaning frequencies. After almost three years, we have more or less tamed the beast and we are close, but not yet there, to what we could get in a European-style grass environment.
Solarthermalworld.org: In our interview with Professor Roberto Roman, who is also from Chile, he said he supported concentrating solar collectors as a more cost-effective solution for copper mine applications. What are your experiences with this type of technology?
Nelson: I have a different opinion than Professor Roman, and I will speak from a more business-oriented view. Different tools for different purposes – for heat at around 50 ºC, which is needed for electrowinning, or even up to around 90 ºC, for a mining “atmosphere,” we would definitely opt for flat plate collectors. Here are some of the reasons:
The mine environment is just too rough. Dust tends to come in the form of very sticky talcum-powder-size particles, sometimes carrying organics from the mining process with winds of up to 140 km/h. Then there is haze, occasional earthquakes and large temperature variations between -30 ºC and up to +40 ºC on the same day. You need very robust and as-simple-as-possible devices and systems. We have realised that the efficiency of flat plate collectors is not as affected by a thin layer of dust – which you always have in the surroundings of mines – as is the one of mirrors in CSP plants.
Solarthermalworld.org: Have you done a feasibility study for concentrating solar thermal system at a copper mine?
Ian Nelson: We have. It does not make economic sense, but we would be happy to be proved wrong. We have analysed some CSP plants built some years ago for an electrowinning process and besides being much more expensive than flat panel solutions, the technology has not passed the test of time. Even the utmost simple ones possess too many mechanisms, bits and parts that need constant repair and maintenance to perform as required in this environment. Besides, as mentioned before, reflection on the mirrors is severely affected by even a fine layer of dust. Cleaning also affects the surface, sometimes permanently.
Obviously, technologies have to show economic soundness and the developer will have to confront the lending banks, which tend to ask hard questions that need to be answered.
Furthermore, mines are very isolated and hard to reach. If you need even a normal replacement, it could take you days to get it into the site. This is not even taking into account all the restrictions mines impose. Everything has to have an approved procedure for the job. For example, it could take you weeks to obtain permission just to drill a hole in the concrete or to get a truck inside the site.
Solarthermalworld.org: With the great showcase of the Gabriela Mistral mine on your side, were you able to convince other mining companies to invest in solar heat?
Nelson: Convincing mine operators has been a constant struggle. The main challenge today is the low price of oil and natural gas and, second, short-term contracts, which are somewhat related to the depressed price of copper. We presented, for example, an offer to one of the largest Chilean mines which was 5-8 % lower than the fossil-fuel alternative, plus we were taking all the technological and operational risk, therefore offering a simple energy delivery contract. But the answer was that they did not want to enter into a long-term contract and just did not have the time to supervise us. Another mine told us that if we did not deliver at least a 30 % rebate, it was not worth the effort for them.
It seems when things get serious, the copper industry does not have enough appreciation for the value of having an emission-free, local-based energy source which also liberates them from maintaining their oft-neglected boiler systems. 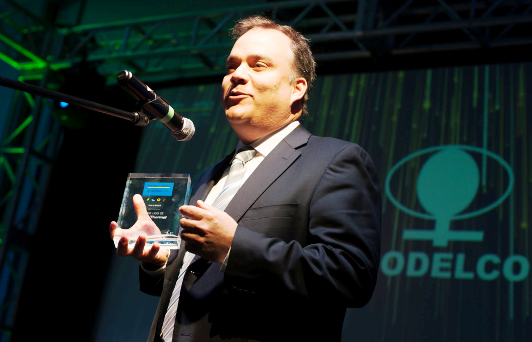 George Howard, Codelco´s USA Manager, received the the Energy and Mines Renewables in Mining Awards 2016 in the category Best Use of Solar Thermal in Mining in Toronto in November 2016-11-26
Photo: Pampa Elvira Solar
Solarthermalworld.org: Does that mean that Pampa Elvira Solar (PES) operates not only the entire solar heat production plant, but also the boiler system for electrowinning?
Nelson: Actually, the contract states that PES must deliver 100 % of the heat that the process requires by maintaining a temperature in a narrow range and at a minimum solar share. So, we also run the existing boilers and heat exchangers. If the temperature goes outside the range or the solar percentage is below limits, fines will be charged. Although Codelco pays for the diesel that is burned, we also have metrics for total energy use, meaning PES is concerned with total energy efficiency too.
The industry must really honour Prof Roman for convincing Codelco to go for an implicit ESCO model in the bidding process. This was the way to go and was done in a really clever and professional way.
In addition to the energy saved, Codelco also profits significantly from the fact that we consistently kept the electrolyte temperature within range, something they had never really managed before for reasonable periods of time. Therefore, the mining operators have been able to concentrate on other process variables that required their attention. As a result, the copper cathodes produced by Codelco were consistently of better quality. Actually, early this year Gabriel Mistral finally got the Gaby Cathode quality trademark on the London Metal Exchange (LME) and the US COMEX.
We are also very proud that Codelco together with PES has just been recognised with the Best Use of Solar Thermal in Mining at the Energy and Mines Renewables in Mining Awards 2016 held in Toronto.
The interview was conducted by Bärbel Epp.
Websites of companies mentioned in this interview:
Energía Llaima: http://www.ellaima.cl/
Pampa Elvira Solar: http://www.solartermico.cl/?page_id=960
News
Process Heat
Chile
Denmark
Gabriela Mistral mine
concentrating collectors
ESCO model
Pampa Elvira Solar
Energía Llaima
Arcon-Sunmark