Skip to main content
Sign up for newsletter
Follow us
Advanced search
German research institute Solites has compared different models of solar heat use in district heating networks by focusing on the economic viability of these projects. The study Solar Heat Networks for Baden-Württemberg – Fundamentals. Potentials. Strategies. published at the beginning of July was supported by the Ministry of the Environment, Climate Protection and the Energy Sector of Baden-Württemberg, a federal state in the south of Germany (see the attached document in German). The authors of the study analyse seven different generic types of district heating systems which integrate solar thermal, and they come to the conclusion that type 3, 6 and 7, i.e., applications in small rural district heating systems as well as integrations into existing larger urban district heating systems, generate the lowest solar heat costs. On average, heat costs are around 60 EUR/MWh over a period of 25 years, excluding subsidies. In some cases, they even get below 50 EUR/MWh.
Source: Solites 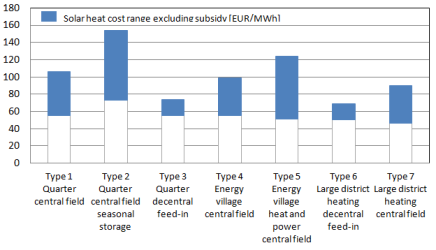 “50 EUR/MWh can be realised with ground installations in settings where system design is kept simple, solar shares are below 15 % and the district heating system operates at low temperatures,” the study concludes. The calculation of the solar heat prices is based on the annuity method with an interest rate of 4 % over 25 years, assuming that 100 % of the installation is credit-financed, and it includes all investment costs from the average useful lifetime of the components to cost per year for maintenance and repair, using the factors mentioned in table 1 and 2 below. This calculation method was derived from the German VDI 2067 standard (see also the comparison between Danish and German calculation models).
Table 1: Additional costs are calculated as a function of the costs for the main components. The planning process of central collector fields is included at 10 % because a centralised heat control station is necessary, whereas the planning of decentralised fields has been put at 5 % of the investment costs.
Source: Solites
According to the study, there are three main factors which influence the competitiveness of solar district heating systems:

Solites has calculated the profitability of the solar thermal systems by adding up the investment in the main components, e.g., the collector fields and the storage, other costs for additional components, as well as operating and maintenance costs (see table 1 and 2).

Table 2: Annual costs added to investment costs
Source: Solites
The study shows that solar district heating costs of 50 EUR/MWh are possible and that considering the subsidies available in many countries, solar heat is competitive, given district heating network operators compare total investment costs of a solar district heating system with the investment costs in an alternative system plus fuel prices, Thomas Pauschinger from Solites says. Of course, each project requires individual calculations, but the study shows where the most promising markets for solar district heating are.
The study was carried out in the framework of research project SolnetBW, which is meant to pave the way for increased solar thermal investments in Baden-Württemberg. The other project partners besides Solites are the two German research organisations Institute for Energy Economics and the Rational Use of Energy at the German University of Stuttgart and the Hamburg Institut, as well as the Heat & Power Association, AGFW, and the KEA Climate Protection and Energy Agency of Baden-Württemberg.
More information:
SolnetBW: http://www.solar-district-heating.eu/bw/Startseite.aspx (in German)
Solites: www.solites.de
Klimaschutz- und Energieagentur Baden-Württemberg GmbH: www.kea-bw.de
Institut für Energiewirtschaft und Rationelle Energieanwendung der Universität Stuttgart: www.ier.uni-stuttgart.de
AGFW, Der Energieeffizienzverband für Wärme, Kälte und KWK e.V.: www.agfw.de
HIR Hamburg Institut Research gGmbH: www.hamburg-institut.com
This news was written by Vanessa Kriele, a German freelance journalist specialised in renewable energies and world economics.