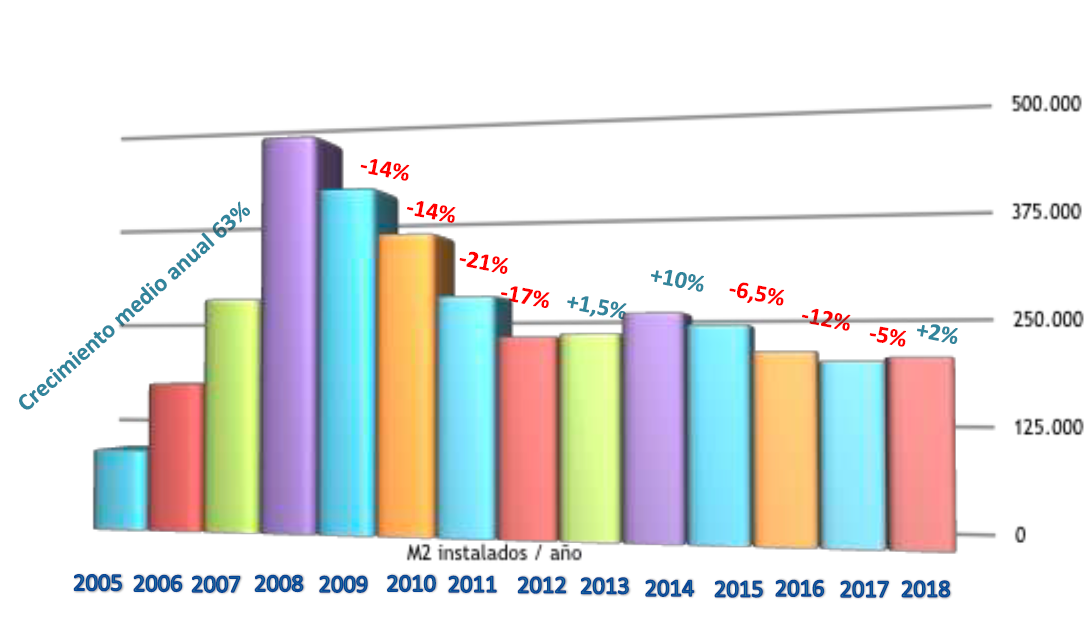 According to national solar energy association ASIT, the Spanish solar thermal market was up by 2 % and added 205,530 m2 (144 MWth) of collector area in 2018 compared to 2017. An increase in newbuilds was the main reason for that growth – a trend which is expected to continue for some time to come. In addition, new solar district heating systems will be started up this year. The chart shows the amount of solar thermal collector area installed between 2006 and 2018.
Source: ASIT
Although Spain’s economy and GDP have been growing steadily since 2014, the market for solar thermal performed poorly and decreased by 21 % between 2014 and 2017. A turning point apparently came in 2018. Despite adding barely 4,000 m2 of collector area more than in the previous year, the market grew for the first time since 2014. The lion’s share of it was due to Spain’s CTE building regulations, which have stipulated the installation of solar water heaters in newbuilds since 2006.
ASIT’s annual market report published mid-February shows that 86 % of the collector area added in 2018 was the result of CTE regulations and 14 % was installed because of local or regional incentives or was entirely unsubsidised. Pascual Polo, ASIT’s General Secretary, emphasised that Spain’s market was becoming increasingly dependent on CTE: “In 2013 and 2014, about 30 % (80,000 m2) of growth was due to regional incentives, such as those in Andalusia. This way of supporting the market has all but disappeared. Now, barely 5 % (15,000 m2) are installed thanks to regional programmes.”
One exception is the Valencia region, where a promising tax credit scheme for solar thermal and solar electricity started early 2018. “We still don’t have any data on the number of solar thermal installations for which relief was claimed on tax forms in Valencia. However, we are optimistic that the programme will have had a positive impact on the market,” said Polo. Thanks to this support scheme, investors can see their tax bills reduced by 20 % of what they each had to pay for a solar water heater or other renewable technology, up to a maximum of EUR 8,000. 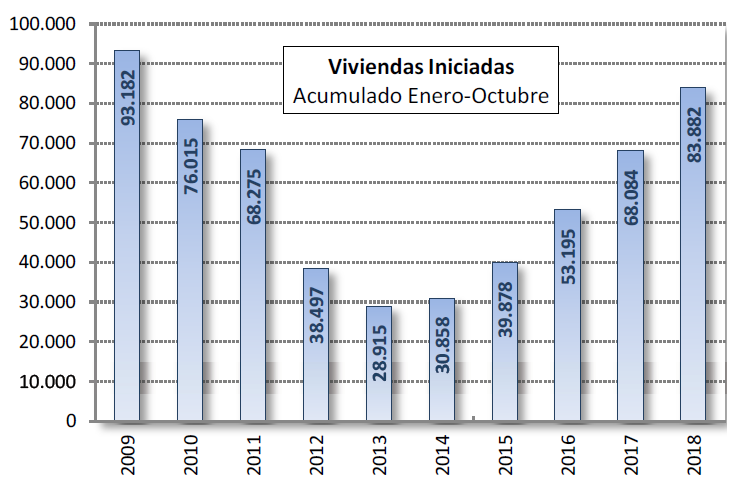 Started building projects each year. Data for 2018 goes until October.
Source: Ministerio de Fomento
Overall, the drop in regional incentives has been compensated by an increase in CTE-related building activity (see the chart above). In 2017, construction started on 68,084 residential units. By October 2018, the housing ministry counted 83,882. “Considering the increase in the number of projects that have been either started or finished, we expect a steadily growing solar thermal market over the next three to four years,” said Polo.
In addition to the CTE incentives, Polo sees a rising interest in solar district heating systems, mainly in combination with biomass boilers. “We expect some large systems to be brought online in 2019,” he said. In February 2018, Alcalá Ecoenergías signed a deal with the city of Alcalá de Henares to build district heating networks powered by solar energy and biomass, with the aim of supplying renewable heat to 12,000 residential buildings. Other SDH projects were in the planning phase, it was said, but it would be too early to announce them, as contracts had yet to be signed. Investors in SDH can benefit from grants offered by the country’s environment ministry. The Proyectos Clima agreement makes it possible to receive about EUR 10 for every tonne of CO2 avoided. Another source of funding is a 20 % investment subsidy paid through the PAREER-CRECE support scheme.
Barely utilised collector production capacity
Spain’s collector industry had good news to report over the last five years despite a stagnant national market. The growth in exports continued in 2018, with 136,200 m2 being delivered to customers abroad, an 8 % increase compared to the previous year. ASIT believes that the share of collector area produced in the country made up 33 % (68,108 m2) of total sales last year. Most collectors were manufactured by BDR Thermea/Baxi, Delpaso Solar or Termicol.
ASIT assumes that national collector production capacity has increased to 1,300,000 m2 but that most of it remains unused. Last year, capacity utilisation reached 15 %, which means it was a bit higher than in 2017, when it peaked at 12 % because of growing exports.
Spain is sorely lagging behind its national targets as set out in PER 2011-2020, the country’s renewable energy road map. Its aim is to reach 10 million m2 of solar thermal collector area by 2020. The ASIT report forecasts that less than 5 million m2, or half of the actual objective, will have been installed by then if current trends continue.
Vacuum tube collectors increased their market share in 2018. Last year, the solar thermal sector in Spain generated sales of EUR 164 million and employed about 4,110 people. Source: ASIT
Organisations mentioned in this article:
www.asit-solar.com
Tax incentives in Valencia: further information here
Alejandro Diego Rosell is a Madrid-based freelance journalist and consultant specialising in renewable energies.