By 2025, the European Union aims to have supported the design, deployment and replication of 100 Positive Energy Districts (PEDs) through its Strategic Energy Technology (SET) Plan. PEDs represent a new and complex approach that requires the involvement of a large number of stakeholders from municipal governments. To help cities and towns put up these districts, the transnational Joint Programming Initiative (JPI) Urban Europe based in Vienna, Austria, intends to promote cross-border cooperation as well as an exchange of ideas and lessons learned. As a starting point, JPI published a booklet describing 28 PED projects. Two of them have already been completed, while another 18 are being implemented and eight are in planning. The image above shows one such PED project, a smart city district that will be built in Bodø, Norway, on a former airport field.
Source: Bodø municipality

“In our approach with supporting PEDs we try to be as broad as possible to integrate as many strategies as possible,” said Christoph Gollner, PED Programme Manager at JPI. It is the reason behind JPI’s rather broad definition of PEDs:

“Positive Energy Districts are energy-efficient and energy-flexible urban areas or groups of connected buildings which produce net zero greenhouse gas emissions and actively manage an annual local or regional production surplus of renewable energy. They require the integration of different systems and infrastructures and interlinks between buildings, users and regional energy, mobility and ICT systems while securing the energy supply and a good quality of life for all in line with social, economic and environmental sustainability.“

A map showing every PED in Europe is part of a 182-page booklet, which will be updated regularly. In its current version, which came out in February (see the attached PDF), the document includes 61 case studies divided in two categories: first, projects for which PEDs have been announced (see PED Projects section) and second, those where smart city districts have yet to play a role but which have features that could be of interest to the PED programme (Towards PED Projects). February’s PED Projects leader was Norway, with nine ventures, followed by
Finland with four and Italy with three.

When the JPI gathered data on the PED projects, they also asked local initiators to name the success factors, challenges and barriers regarding project implementation. Gollner subsequently compiled the highest-ranked answers into a chart (see below). 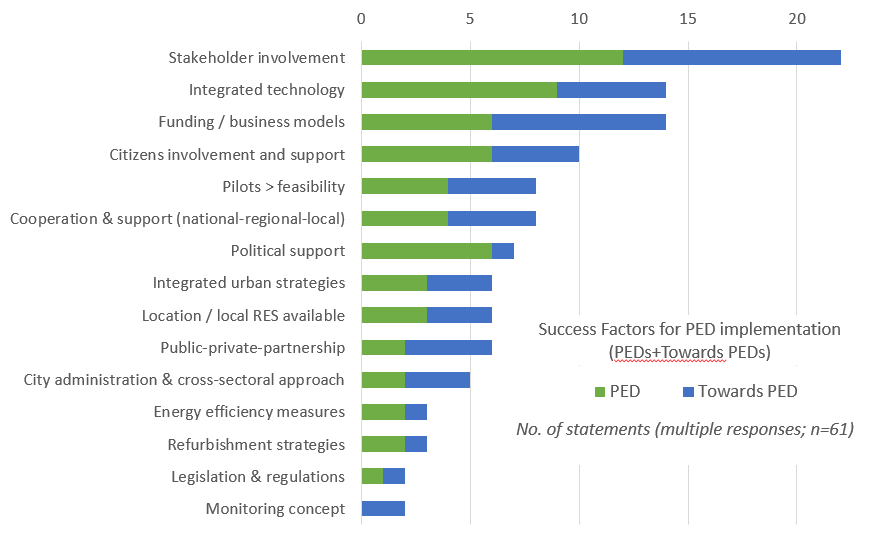 “When analysing the statements, we found that a key element in understanding the success or failure of a project is to look at how involved urban stakeholders and residents are in its implementation. Another important factor is political support, or the lack thereof, most likely in connection with funding availability,” Gollner said.

These conclusions made strategies that support stakeholder involvement the focus of an initial PED-related call with a EUR 2.7 million budget. In November, JPI Urban Europe then selected four out of a total of 12 projects submitted and announced that a kick-off meeting would take place in early 2021. Four groups of researchers and practitioners from across several disciplines and industries will now develop effective instruments and data-driven participatory processes in the next year or two while encouraging an intensive exchange of ideas, an increase in municipal generation capacity, and the establishment of a network among experts in the relevant field.

Gollner emphasised that this first call have been a smaller pilot, only supported by four partner countries, namely Austria, Belgium, the Czech Republic and Sweden. His hope is that He hopes to be able to carry out larger calls in 2021 with additional funding provided by more partner countries.