Belo Horizonte, a municipality about 600 km north of Sao Paulo in the state of Minas Gerais, is also known as the solar capital of Brazil. Not only does it have a population of about 2.5 million, but solar water heater installations on many of its high-rise multifamily buildings. The photo shows one example, a block of flats for the wealthy middle class. The roof is completely covered in solar water heaters, which meet around half of the annual hot water requirements. This article will present the main drivers of an exciting market development in Latin America: a university research group specialised in solar heating and cooling, committed system planners, strong manufacturers and a pro-solar state utility.
Photos: Bärbel Epp
One pioneer of Brazilian solar thermal research is Elizabeth Duarte Pereira, Associate Professor at the UNA University Centre of Belo Horizonte and head of the energy research group. Pereira, a physicist who holds a PhD in chemistry, has prepared generations of students for the solar heating and cooling jobs they hold in manufacturing and planning throughout the country today. She also initiated and oversaw the installation and commissioning of the first two cooling systems powered by solar heat and set up as demonstration plants at the UNA campus this March (see the table below).
Key figures of Brazil’s first two solar thermal cooling systems
Source: UNA University Centre
“The results from monitoring have so far confirmed chiller performance as stated by the manufacturers,” Pereira said. “The 35-kilowatt Yazaki chiller has achieved a thermal COP of 0.6 in normal operation and if we take into account the additional heating system for the university’s swimming pool, the value rises to 1.” However, the chillers are still mightily expensive because they are imports. The university purchased the collector field locally from Prosol, which uses selectively coated absorbers.

Collector field measuring 44 m² (left), along with dry cooler and hot water storage tank (right). The 10 kW adsorption chiller is in the monitoring room below the cooler. As project 438, the installation was supported by the CEMIG utility and the country’s Electricity Regulatory Agency, ANEEL.
Photos: UNA University Centre
Cost-effective commercial hot water solutions
Another pioneer is Carlos Artur Alencar, CEO of Enalter (see the photo below). His company specialises in designing and installing large-scale solar water heater solutions for customers from the residential segment, hospitals and hotels. “Belo Horizonte was built on hilly terrain. The clear blue sky and cold nights in winter mean that hot showers are a must and the sun can contribute all year round,” he explained. Solar thermal is also very cost effective when you look at the relatively high prices that local utility CEMIG charges for electricity further increased by the high local taxes. 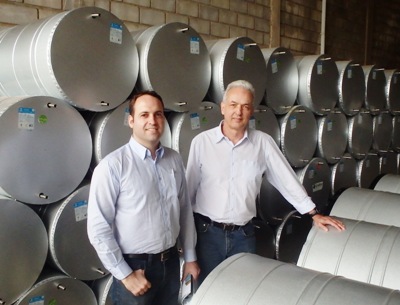 Company founder Carlos Artur Alencar (right) and project developer Fabiano Lara de Paula in the storage warehouse of Enalter Engenharia Indústria e Comércio
Photo: Bärbel Epp
One of Enalter’s largest installations in the municipality is located on top of the Unimed hospital. Since the 250-bed facility opened its doors 10 years ago, hot water demand has been met almost entirely by the waste heat from the air conditioning chillers, a pumped collector field of 326 m² and five 5,000-litre tanks, all of which were mounted on the roof. The added gas boilers only run once a week during winter. Enalter, which was in charge of planning the installation, continues to provide maintenance services for it. The hot water in the tanks is limited to 58 °C, as it is directly led into the building.
Delivering 100,000 units for solar housing project
A third important player on the regional market is air conditioning manufacturer Tuma Industrial, which began producing collectors and tanks in 1975. Its solar department saw the number of employees peak at 300 in 2014, during the “golden year” of the Minha Casa Minha Vida (My house, My Life) solar housing programme. Factory Manager Frederico Dantas dos Santos said that Tuma had manufactured and shipped around 100,000 solar kits to governmental housing projects all around the country. When the programme ended in 2016, it had to let go a significant share of its solar department staff.
“We have developed a system that is very fast to set up by using only a few screws, so that two installers can finish one unit in around half an hour,” he said. On average, the programme allocated a 1.6 m² black-painted collector and a 200-litre tank to one family. Obviously, a solar water heater provides a higher level of comfort than a small electric shower head, but it tends to increase hot water consumption as well. 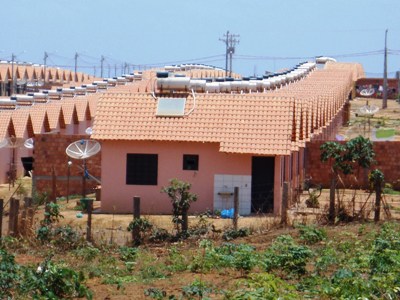 Solar housing project consisting of 700 units installed in 2012 in the state of Pará
Photo: Tuma
PROPEE: Largest energy efficiency subsidy scheme
State utility CEMIG was an early supporter of solar water heater solutions. Since the launch of the PROPEE energy efficiency programme in 2000, it has financed many solar water heaters to replace electric shower heads in multi-family properties, hospitals and nursing homes. PROPEE, which stipulates that all electricity suppliers must invest 0.5 % of their net turnover in energy efficiency measures, is the largest financing scheme for energy efficiency in Brazil and has an annual budget of BRL (Brazilian Real) 450 million (EUR 121 million). According to estimates by Abrasol, Brazil’s national solar thermal industry association, around 2 % of this budget is spent on solar water heaters each year, which means around BRL 75 million (EUR 20 million) have been invested in the technology since the programme started 17 years ago.
Websites of organisations mentioned in this article:
UNA University Centre: https://www.bachelorstudies.com/universities/Brazil/UNA/
Tuma: http://www.aquecedorsolaragua.com.br/
Enalter: www.enalter.com.br
CEMIG: http://www.cemig.com.br/en-us/Pages/default.aspx
News
Domestic Hot Water and Heating
Solar Cooling
Finance and Incentives
Brazil
market development
Minha Casa Minha Vida
PROPEE
Tuma
UNA University Centre
Yazaki
Prosol
ANEEL
CEMIG
Enalter
ABRASOL