Renovating multi-storey buildings can be used to create new living space with an additional top floor. That’s where an Austrian consortium led by AEE INTEC comes in: It has developed the Roofbox, an entirely prefabricated modular living space. A Roofbox consists of a bathroom, a kitchen, a separate toilet or living room and bedrooms, and it can be ordered with an active solar water heater system already installed on its roof. Every Roofbox can be transported by an articulated lorry and is rigid enough to be lifted by crane for roof mounting. On 16 September, Austrian Haas Fertigbau showcased in its Großwilfersdorf factory a flat made up of two Roofbox prototypes – which, however, is still missing the solar thermal unit on top (see photo).
Photo: Haas Fertigbau
“The crucial difference to our other prefab parts is the considerably greater degree of prefabrication,” Robert Jöbstl, Head of R&D at Haas Group, said when presenting the company’s new development. Usually, Haas supplies flat prefabricated parts that are put together at the construction site, after which the interior of the structure will be grouted and painted, and the exterior will have to be plastered. Conversely, the interior of the company’s new Roofboxes has already received its finishing touches. It comes with parquet flooring and tiles already in place, the toilet, kitchen, shower, and sinks already installed, the walls of the living space already grouted and painted, and the wiring already done.
Initiator of the Austrian two-year project Roofbox – Resource-Efficient Re-Densification of Large-Scale Multi-Story Buildings with Prefabricated Modules in Timber Construction (2014-2016) was research institute AEE INTEC, which had been looking into prefabricated construction components for energy-efficient renovation for some time. “If we could offer more living space after renovation, our high-quality approach would be much easier to finance,” was an often-heard remark by residential property developers and building owners. 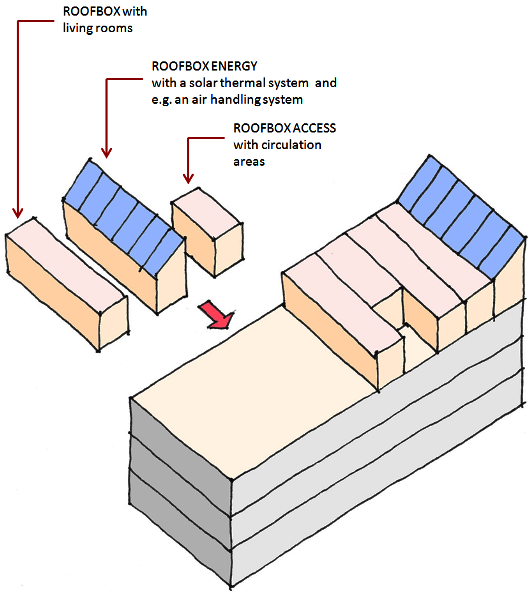 Roofboxes with a completely finished interior – and optionally equipped with solar technology – are being lifted by crane onto the building in need of renovation. Power and water lines are led downward through a duct at the facade of the existing building.
Image: AEE INTEC
From the 1960s to 1980s, Austria saw the construction of many multi-storey buildings in urban locations boasting superb infrastructures. They would be the ideal candidates for adding another floor of attractive living space – basically penthouses in prime location.
To ensure the structural stability of the existing building, the initiators have relied on lightweight wood construction from the beginning. Additionally, the renovation has to affect tenants as little as possible. This pushed prefabrication to the front and centre of the project.
During the project run, the researchers developed renovation plans with Roofbox designs included and performed cost estimates for two multi-family buildings located in Salzburg, Austria, and owned by Salzburg’s housing association. All in all, their efforts could result in ten to twelve new units of 88 to 98 m² each in good location, depending on the chosen design approach.
The costs for a Roofbox are only slightly above the ones for adding the usual top floor. They are the result of improvements, such as the high-quality building envelope or the passive house standard. However, the additional money is certainly well invested considering the greater quality of production and implementation, shorter construction times as well as the option to add balconies for flats on lower floors, according to Karl Höfler, Head of the Sustainable Buildings department at AEE INTEC.
Prefabrication to become the new normal in construction
One core issue of the research was how rigid the box needed to be for road transport and crane mounting. Haas used a 1.5 m wide and 6.5 m long 1:2 model to test whether transporting the Roofbox by articulated lorry or lifting it up by crane would damage the tiles, cause cracks in the plastered walls, etc.
In Jöbstl’s view, prefabricated modular living space will eventually become the standard mode of construction. It not only guarantees a quality improvement in interior work, but also promises production all year round – independent of weather conditions. In addition to roof mounting during block of flat renovation, the research head could also imagine the module’s application on industrial and commercial premises. It could even be used as a micro-building for holiday homes or stacked on top of each other to create multi-storey buildings.
Websites of companies and projects mentioned in this article:
AEE INTEC: http://www.aee-intec.at/
Haas Fertigbau: http://haas-fertigbau.at/
Roofbox: http://www.aee-intec.at/index.php?seitenName=projekteDetail&projekteId=1...
News
Domestic Hot Water and Heating
Austria
Green Buildings
multi-storey buildings
renovations
Roofbox
Haas Fertigbau
AEE Intec