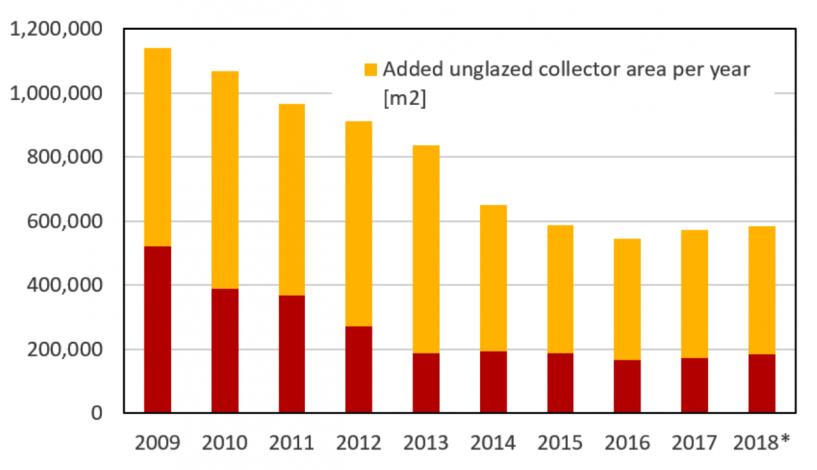 For the second time in a row, the Australian solar heat market showed modest growth (6 %) in the number of glazed collector systems as the new collector area totalled 183,200 m² (128 MWth) in 2018. The above chart is based on preliminary data provided by Dr David Ferrari, who serves, in the role of technical supervisor, on Victorian Energy Upgrades’ Essential Services Commission. The key driver of growth was again the Renewable Energy Target scheme, which stipulates that electric utilities must buy small-scale technology certificates (STCs) to achieve national sustainability goals. STCs are issued for residential and commercial solar hot water systems, regardless of size, provided they are equipped with glazed collectors. And yet, unglazed collectors still dominate the landscape: sales hovered around 400,000 m² (280 MWth) annually in the last five years.
Source: David Ferrari for 2014 to 2018; Solar Heat Worldwide for 2009 to 2013
The STC scheme uses a so-called deeming approach, which means certificates are created upon commissioning of the system based on yield expectations over the lifetime. Hence, STC sales reduce capital expenditure but are not treated as turnover throughout the economic life of the installation, as has been the case with other emission reduction schemes.
Growth in the SHC market was cut nearly in half in the last 10 years, dropping from about 1.1 million m² to 580,000 m² a year. Key reasons for the decline were were the focus on PV rooftop installations, stiff competition from heat pump suppliers, and a rather small increase in large commercial systems in tourism and industry.
Focus on PV rooftop installations
The chart below illustrates how residential PV systems were the driving force behind the STC scheme in past years. Up until 2009, renewable certificates had been issued for a steadily growing number of solar water heaters before PV overtook solar water heaters in 2010. According to Australia’s Clean Energy Regulator (CER), which monitors adherence to the country’s renewable energy targets, the owners of 2.15 million PV systems sold certificates to utilities between 2001 and June 2019, but only less than half owners of solar heat systems (0.9 million) profited from selling certificates. Separate cumulative number of systems are available for each heating technology, whereas the annual figures in the following chart shows only aggregated data for air source heat pumps and solar water heaters together.
Additional reasons for the decline of the solar water heater market between 2010 and 2012 were the sudden end of the Federal Solar Water Heater Rebate in 2010, the stop of the Renewable Energy Bonus Scheme in February 2012 and the expiration of state-level support programmes. 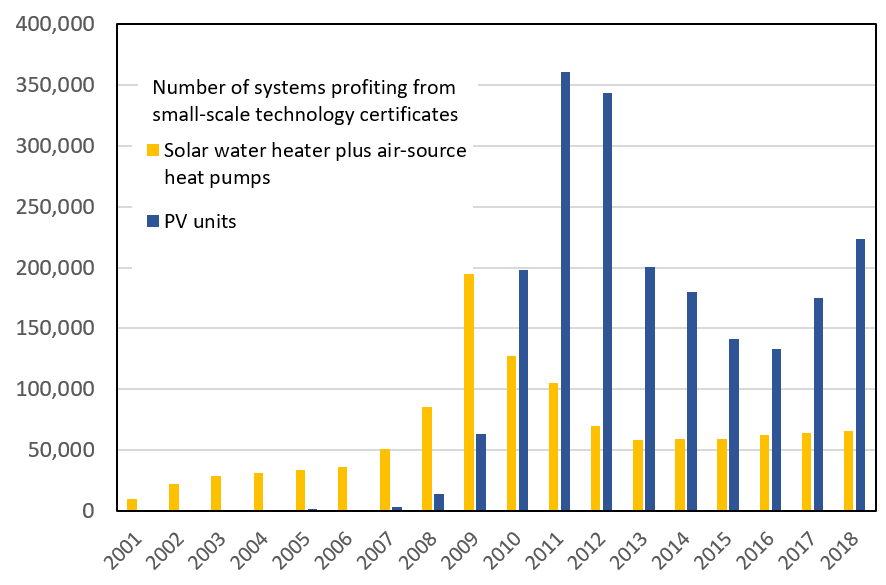 Online statistics showing the number of heating systems that profited from sales of small-scale technology certificates between 2001 and 2018. The total number of hot water systems (yellow bars) for which certificates were created in that time was 1,183,096 – 22 % (259,518) of which were not solar heat units but air source heat pumps. The 2018 and 2019 totals may still change, as entities registered for the STC scheme have 12 months to create certificates.
Source: Clean Energy Regulator
In stiff competition with heat pumps
“Heat pumps have been in stiff competition with both glazed and unglazed solar heat systems,” said Ferrari. STC data shows that their influence on the market has been growing. Between 2001 and 2018, air-source heat pumps made up about 22 % of the total (see the chart above). But the separate figures for heat pumps and solar water heaters which became available last year indicated that their share of the market had grown to 32 % (21,031 out of a total of 65,571 hot water systems).
Small increase in large commercial systems
“In 2018, we were not involved in the construction of any large solar heating or cooling installation,” confirmed Marko Pintar, Managing Director of Greenland Systems, one of the country’s major solar thermal project developers. “The low cost of PV certainly presents a challenge to solar thermal project developers, for well-known reasons. But I don’t believe it is the only issue.” Pintar named other retarding factors, mostly tied to commercial systems in the country’s public and industrial sectors:
To be prepared for the future, Pintar suggested a business model using “some form of solar heat system leasing”. It would involve the building owner, business operator and technology supplier in order to avoid large fees for lawyers because of “the legal minefield caused by separate ownership of the renewable energy system”.
Organisations mentioned in this article:
http://www.cleanenergyregulator.gov.au
www.greenlandsystems.com.au
https://www.esc.vic.gov.au/victorian-energy-upgrades-program
News
Australia
market development
Solar Heat Worldwide
Renewable Energy Target scheme
STC scheme
Clean Energy Regulator
Victorian Energy Upgrades’ Essential Services Commission
Greenland Systems