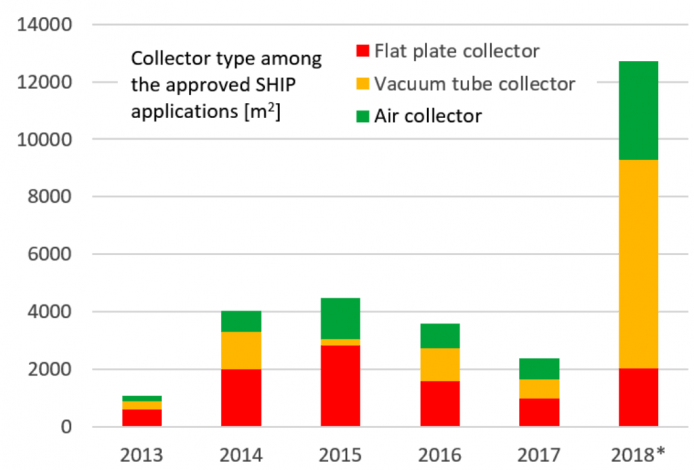 Solar process heat has been a focus of Germany’s Market Rebate Programme, or MAP, since 2013. Last year, the programme’s managers noted increased interest in MAP funding, with 76 applicants requesting grants for 12,729 m² altogether. The collector area of all systems combined was almost as high as that of the 241 installations supported between 2013 and 2017, when the area added up to 15,605 m². Market players also expect awareness of solar process heat to increase this year, as the programme became part of a much larger one called Energy Efficiency and Renewable Process Heat in the Economy at the beginning of 2019.
Data: Institute of Thermal Engineering, University of Kassel
“In 2018, there was a trend towards larger installations. The average size of the 76 systems for which grants were requested increased to 167 m²,” said Bastian Schmitt, Head of the Process Heat group at the University of Kassel’s Institute of Thermal Engineering. The number of applications is growing due to rising energy prices and the expertise that technology providers have gained from several years of continued financial support for process heat plants. This long-term support has been a crucial factor in boosting the solar process heat market, which is characterised by long planning phases and special requirements for engineering know-how by technology suppliers.
Another push factor has been the promotion of the support programme at trade fairs and in training sessions by energy consultants. “For example, we will have a stand at Frankfurt’s Energy Efficiency Fair in early September. Last year, the fair attracted around 2,400 representatives from businesses, municipalities and the real estate industry,” explained Schmitt.

The average size of solar process heat systems grew in 2018 compared to previous years. *In 2018, the count includes all applications; between 2013 and 2017, the table shows only the number of systems that had actually been installed.
Source: Institute of Thermal Engineering, University of Kassel
Simplify grant applications for ventures
To make it easier for ventures to cut energy costs and greenhouse gases, the German economy ministry has combined all related support schemes into one big support package, which it has named Energy Efficiency and Renewable Process Heat in Economy. Renewable process heat is one of four categories in this huge package. The other three are:
Technologies eligible for renewable process heat support are solar thermal systems, biomass boilers and heat pumps. Small and medium companies can apply for grants covering 55 % of the investment; larger ventures receive ones covering 45 % of the costs.
Solar cleaning and drying dominate support scheme 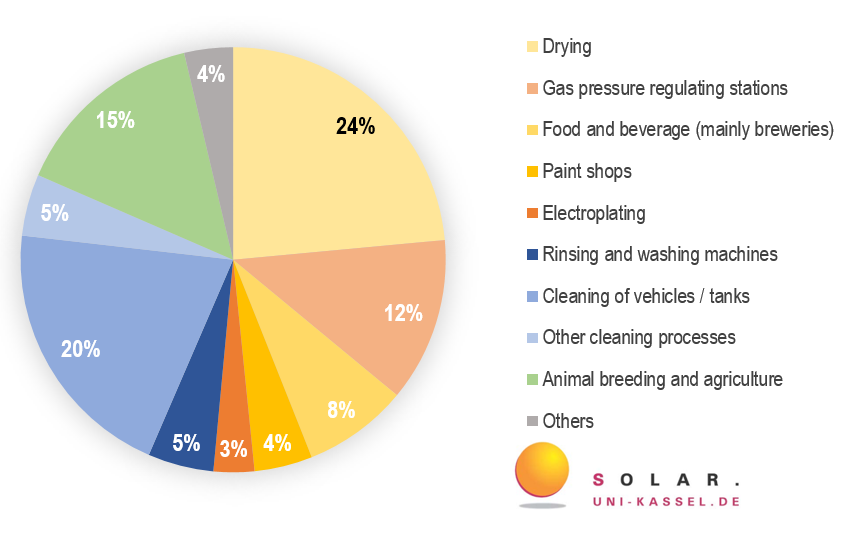 Type of application based on subsidised collector area. The chart includes some process heat systems completed before 2013. The total collector area was 32,860 m².
Chart: solrico / Data: Institute of Thermal Engineering, University of Kassel
Drying is an important application for solar process heat within the subsidy scheme. As a result, every fourth collector used for process heat transfers thermal energy by air circulation despite this sort of collector contributing only around 10 % to the area newly installed in Germany each year.
The same is true for vacuum tube collectors. Their share in the subsidy scheme, 30 % on average over the last six years, has been greater than their share in annual collector additions, since they can provide heat more efficiently than flat plate versions at higher temperatures.
Typically, industrial solar process heat is used in breweries, paint shops in the automotive sector and electroplating businesses: Applications for all of them had been submitted to MAP in past years. According to Schmitt, gas pressure regulators driven by solar heat have been a strongly growing market over the last two years.
In addition, the German programme funds floor heating in small pig stables owned by animal breeders or supports heaters for agricultural uses, such as greenhouses, although, strictly speaking, these are not what you would call industrial process heat systems.
See also the previous news articles on the German process heat support scheme:
News from 21 April 2017
News from 11 November 2016
News from 24 March 2015
Organisations mentioned in this article:
http://www.solar.uni-kassel.de/
http://www.bafa.de/DE/Home/home_node.html (in German)
Learn more about solar process heat at www.solare-prozesswaerme.info (in German)
For details on the Energy Efficiency and Renewable Process Heat in Industry/Economy programme, please see: http://www.bafa.de/DE/Energie/Energieeffizienz/Energieeffizienz_und_Proz...
News
Process Heat
Finance and Incentives
Germany
MAP
market development
Energy Efficiency Fair
SHIP
market opportunities
University of Kassel
Institute of Thermal Engineering
Bafa
Solrico